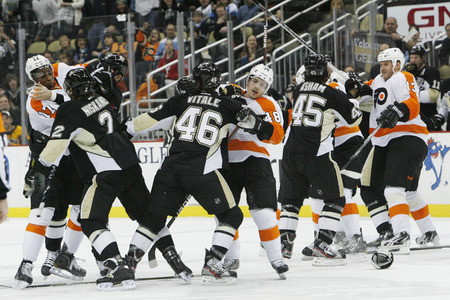 Here are some quick hit stats for the much anticipated Penguins/Flyers first round matchup.

Penguins and Flyers both finished the regular season with identical 19.7% power plays.The Flyers were #1 in total PP time this year with 548:50. The Penguins were 10th with 463:13.

However during the regular season Flyer/Pens matchups, those numbers do not tell the story.

That tells me that the Flyers PP has been getting the better of the Penguins PK this year. Considering that the Flyers drew the most PP time during the course of the year, this could pose trouble for Pittsburgh unless they improve in an area that should be a strength of theirs.

However, when trailing after two periods the Penguins were best in the league in coming back by notching 8 victories. The Flyers were 11th in that department earning 5 wins.

Matt Cooke and Max Talbot both had career high in goals this season, 19. Talbot won the PIM battle 59-44

Here are some player statistics and how they fared against one another this season:

Scott Hartnell had 3 goals and 2 assists in 6 games. Surprisingly no points on the PP given how successful Hartnell has been in his PP role.

Claude Giroux had 1 goal and 7 assists in 5 games. 5 of those assists were on the PP.

Evgeni Malkin had 3 goals and 6 assists in 6 games. Only 2 assists on the PP. Malkin was very dangerous 5 on 5 vs the Flyers this year.

Jordan Staal had 2 goals and 3 assists in 6 games. He had 1 shorthanded goal.

X factors for the Penguins:

Arron Asham. His game is tailor made for the playoffs; Flyer fans are very familiar with just how good he can raise his game in April/May/June. Last season Asham was tied for the team lead in playoff scoring last year with 4 points. It is his physicality and grinding that make him such a valuable asset this time of year. He is able to win 1 on 1 physical battles and agitate the opposition.

How will the Flyers match lines against the 3 center approach? The Penguins possess some of the most unfavorable matchups for opposing teams when they are rolling out 87, 71, and 11 shift after shift. Bylsma also loves to use the “two headed monster” (87 &71) at the end of periods which usually results in some quality zone time for Pittsburgh.

Matt Niskanen’s health. You could argue that outside of Kris Letang, Matt Niskanen was the Penguins best blue liner this season. He was very steady and failed to have the ups and downs that plagued much of the Penguins blue line this year. It remains to be seen if he will soon find his way into the lineup. The other options if Niskanen is out is Ben Lovejoy who has been out with a knee injury the last month of the season, and young callup Brian Strait who has been underwhelming in his latest call up. The Flyers have the potential to expose any weakness on a team’s defense as they have extremely balanced scoring. It won’t be easy for the Penguins to “hide” a defensemen against the Flyers.

X factors for the Flyers:

The first x factor is one of their offseason pickups that Penguin fans are very familiar with. The Superstar himself, Max Talbot. Talbot is able to play any role in the playoffs and do it successfully. His penalty killing is a major asset, but he has the knack for potting extremely important goals. He is also able to play top 6 minutes if need be as well. He will surely want to make an impact against his former team.

Ilya Bryzgalov had a fantastic regular season with the Coyotes last year, however his playoff performance was very underwhelming. Yes he played against the big red machine that is the Detroit Red Wings however if you saw the kind of goals he let in during that series, it left you scratching your head if it was the same guy in net. If Bryzgalov can be the same guy that was on fire the past month and a half, the Penguins will have their hands full.

The young kids, Schenn and Couturier. How will they acclimate themselves in their first ever playoffs? Last season the Penguins made Steven Stamkos look extremely ordinary. The nice thing for these two is that they won’t be rlied on as the primary scoring threats. They will be able to play their supporting roles which they have excelled in all season long. Lately they have both done a great job at getting under the Penguin star’s skin and forcing them off their game. It will be a tougher task in the playoffs as Crosby and Malkin seem to hit another gear.

Enjoy the series, it should be great. 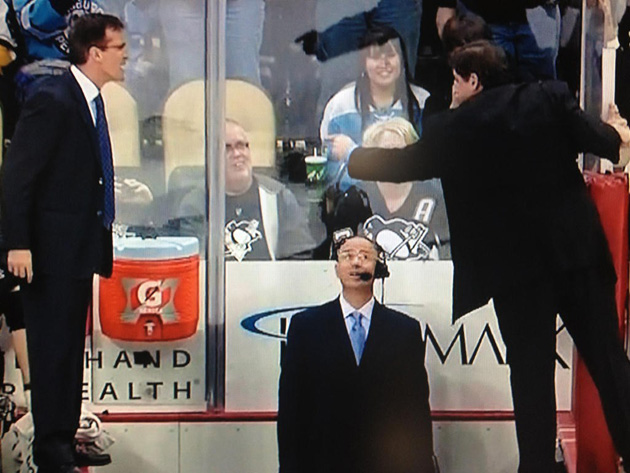