Stevie Y for GM of the Year? 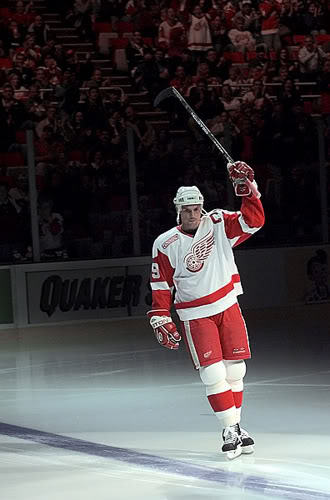 Well of course it is. It's far too early. (edit for clarity) We haven’t even dropped the puck on the 2010-11 NHL season yet; hell, training camp hasn’t even opened yet. But that isn’t going to stop me from laying out what he’s done in his short time as GM, and how he has setup his team to excel long term.

When Stevie Y was named the GM of the Lightning in May 2010, he inherited an underperforming, overpaid team, with only a few gems, that hadn’t made the playoffs since 2007. Going into the off season, Yzerman had six forwards, six defencemen, and one NHL goalie under contract, totaling approximately 39 million dollars. With the team’s anticipated internal cap, set just above the league’s floor cap number, this wouldn’t leave very much room to improve the team’s performance for the upcoming year.

Yzerman had a difficult task in front of him.

Yzerman’s first move was to hire Guy Boucher away from the Montreal Canadiens’ AHL farm team in Hamilton. Boucher won the coach of the year award in his first season in the AHL leading the Bulldogs to a 52 win season and lost a seven game series in the Western Conference Finals. Boucher had coached in the QMJHL for the better part of 13 years before this post, having success in this league as well. Boucher was targeted by the Columbus Blue Jackets as well, but chose the Lightning after receiving a coveted four year contract offer. Boucher will be the youngest coach in the league at 38, and the Lightning hope he can bring that success and fresh ideas to their team.

Yzerman’s next move was to sign the heart and soul of the team in Martin St. Louis to a four year extension on July 1st. And although I don’t mind the cap hit of $5.625 million dollars per year, and despite St. Louis’ seeming ability to get better and better with age, I worry about the 35+ contract issues that accompany the contract. But if retaining one of your better players, to a fair cap hit, is the worst move of the off-season, then Daryl and Jay should be taking notes.

Yzerman then traded out the albatross of a contract that is associated with Andrej Meszaros to the Philadelphia Flyers that same day. Meszaros isn’t a terrible defencemen, but he isn’t a true number one, or even two, and his contract is far too rich for what he offers on the ice. Almost three weeks later, Yzerman hooked up with Paul Holmgren again, acquiring Olympic Gold Medalist and All-Star Simon Gagne. The move bolstered Tampa’s top six bringing even more help to the struggling Vincent Lecavalier and budding superstar Steven Stamkos.

Yzerman has also made solid depth moves, bringing in Dan Ellis to help Mike Smith shoulder the load relieving some pressure to help the youngster get back on the path he was traveling on in his first season with the Bolts before a concussion derailed his season. He has signed Pavel Kubina and Brett Clark on defence creating better depth at that position, while signing Dominic Moore, Sean Bergenheim, and Marc-Antoine Pouliot to fill out the bottom six roles.

All in all, Yzerman has shown a great ability to come in and take stock of what he already had, figuring out what he needed to shed and what he needed to bring in. He has managed to keep his core offense intact, actually adding another offensive weapon, while dropping some long term contracts that will open the door to sign the future franchise player, Steven Stamkos, next season. And while Steve Downie is the only major signing left for a team sitting roughly 8 million dollars below the cap ceiling, I’d say the former Red Wing has done a pretty damn good job of setting the Bolts up for the this coming year. These moves should see them potentially challenge for a position in the Stanley Cup Playoffs, and continue to succeed into the future.

August 25, 2010 12:20 PM ET | Delete
This is not just premature, it's rediculous. A lot of people last summer said the moves made by the Lightning would make them a playoff team and they couldn't be further from the truth. This year may be the same.Play the season and then discuss this topic.
Phigment

August 25, 2010 12:22 PM ET | Delete
Gagne is not the same player he was when he won the gold medal. He is coming off a stretch where he has had numerous concussions and groin/hernia issues. St Louis and Vinny don't really play defense. This team needed to sure up the defensive aspect of the team. Personally I would have made Marty show me commitment to D before resigning him. I do like some of the depth moves, but he made some highly risky moves too. If they do not pan out, Tampa may have another down year.
RinkLighter

August 25, 2010 12:37 PM ET | Delete
I think that, at the very least, Yzerman has this team headed in the right direction. The moves he's made so far do seem sharp, but like vtx said, you need to play the season then dissect the results. If I was a Lightning fan I'd be very excited about the future of the team.
Kevin27NYI

August 25, 2010 8:28 PM ET | Delete
I know 2/3rds of the Habs colors are red and white, but they gave Stevie more gifts than Santa will this december.
Phigment

August 25, 2010 9:40 PM ET | Delete
I still say if Gagne goes down early - and he has the last 3 years - then Stevie may be looking at another high draft pick. Vinny is already hurt too!
chevronman

August 25, 2010 11:37 PM ET | Delete
Yzerman had the green light to put his stamp on this team from the get go, and good on the ownership for giving him that opportunity. On paper the moves he has made look great, but the season is a bit away yet. Remember how Tanguay was supposed to help out the top six last year? How did that turn out? Stevie Y may have the pedigree, but he is still a puppy, not a top dog... not in the GM world, at least not yet!
FlamesBlazer

September 5, 2010 2:06 AM ET | Delete
man i feel where your coming from i understand the view. i think the lightning will be the sleeper team this year. with lecalvalier waking up and the new addition of gagne. good call.