Brad Richards Signing Is Paying Off 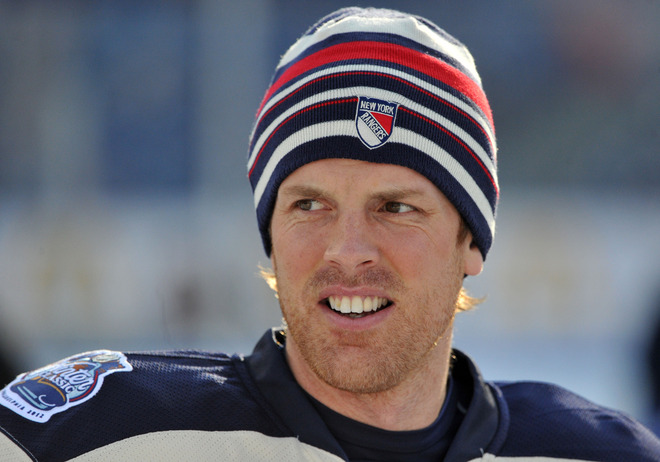 The New York Rangers have long been known for their deep wallet and infamous free agent signings. Some of the worst Ranger signings in history include the likes of Bobby Holik, Darius Kasparitus, Theoren Fluery, Wade Redden, Chris Drury and Scott Gomez. So on July 2, 2011 when the Rangers signed Center Brad Richards to a 9 year, $60 million dollar deal, Blueshirt fans couldn't help being a little skeptical.

Ask me a question about the Rangers and I will most likely know the answer. I don't have a lot of spare time between a full time job, being a husband, father and recreational hockey player. Therefore generally speaking I do not follow other teams and their players.
The first time that I had ever heard of Brad Richards was midway through the 2010-2011 season when the Rangers were looking to acquire him through a trade with Dallas. Before Richards was ever signed on July 2, I knew that he was going to be a different kind of signing.

When the Rangers were looking to acquire Richards during the 2010-11 season, I reviewed his resume at http://www.hockeydb.com. I was extremely impressed. Richards is a very reliable player with a consistent career. He has acquired over 50 points in 9 of his 12 NHL seasons. Richards is on track to obtain 50 points or more with the Rangers this season as well. He currently has 13 goals, 15 assists and 28 points. Richards also has 5 game winning goals for the Rangers.

The Rangers enter 2012 with a record of 23-9-4 (50 points) staking claim to first place in both the Atlantic Division and the Eastern Conference. Those stats don't look too bad until you look at where the Rangers were this time last year. The Rangers were 21-14-3 (45 points). They would finish the 2010-2011 season in 8th place in the Eastern Conference just beating out the Carolina Hurricanes for the last playoff spot with 93 points.

Two factors which contributed to the Rangers poor performance in the second half of the 2010-11 season were quite clear. Firstly, the Rangers fell victim to the injury bug losing players such as Ryan Callahan, Vinny Prospal, Alex Frolov, Chris Drury, Erik Christensen, Derek Boogaard, Brandon Dubinsky and Ruslan Fedotenko. An increase in injuries resulted from the Rangers coaching staff having the players play a more defensive game by blocking more shots in front of their net. The Rangers are much more experienced and efficient this season playing this type of hockey and injuries have been minimal.

The second factor that the Rangers lacked last season was Brad Richards. The Rangers desperately needed a No. 1 center, a power play forward and more leadership in the dressing room. Richards fulfills all three of these roles. He brings Stanley Cup experience having won it back in 2004 with the Tampa Bay Lightening. He also won the Conn Smythe the same year. Young Ranger players like Derek Stepan, Michael Del Zotto and Carl Hagelin have publicly proclaimed how calm, cool and collected Richards is. Richards has helped provide guidance to the younger inexperienced Rangers. His message to these players is "just play your game". Del Zotto has said that he was trying to do too much last year and it ended up costing him his position on the Rangers spending most of his time down in Hartford playing for the Connecticut Whale.

The Rangers have a real chance to finish in the top 3 of the Eastern Conference this year. In order to accomplish this, the Rangers need to keep their foot on the accelerator, stay healthy and keep grinding. The key players to watch in the second half will be Henrik Lundqvist, Brad Richards, Marian Gaborik and Ryan Callahan. Those four players need to stay healthy in order for the Rangers to be successful.

The New York Rangers are playing the Philadelphia Flyers today at 3:00 p.m. (EST) at the Winter Classic in Philadelphia. New York Rangers No. 1 defenceman Marc Staal will be returning to the lineup today after missing 36 consecutive games with post concussion syndrome.