Posted 3:00 PM ET | Comments 1
Now I know that a lot of people are saying that the team needs to just give up and let it sink. I don't feel this is really going to do anything! This team has a good roster, it just has had too many injuries to too many key players. Now the important thing to notice is that there have been no season ending injuries. Although some say Sakic's injury might be a season ending one, I believe he can be back for the playoffs. So looking at the roster there is only one question mark that needs to be corrected..... Goaltending.

Sure it doesn't take a rocket scientist to know this little fact, but then why is the GM sitting idle and not doing something! Now this doesn't necessarily mean a trade; thats just one possibility. Both B Cash and Weimen could have a future as an NHLer, and why don't we give them a try? Then there is the trade route.

All the rumors have a Boston goalie leaving town at the deadline, as well as Toskala from Toronto. Both options I feel could right this ship towards the playoffs. Either goalie in Boston could be a tremendous upgrade for the team. As for Toskala, we all know Toronto isn't the best place to be a goaltender (bad team, lots of pressure) and Toskala has been a great goalie in the past for San Jose, could he bring that back? 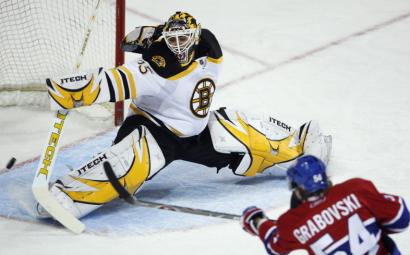 Now again the question is what would we need in order to move one of these guys out of town. From the sounds of it Liles, Leopold, Clark, Svatos, Arnason, and Hensick are all possible people to be sent out. With those players I am sure Both Boston and Toronto may see something they like for either player. Now lets just see if Giggy decides to do anything and get off his hands. Cause somethings needs to be done before it is too late![img:left][/img]
Filed Under:   Colorado   Avalanche   Avs   Goalies   Budaj   Raycroft   Boston

January 23, 2009 3:09 PM ET | Delete
What about the possibility of JS Giguere moving. Big contract but he has won the cup and could seriously bolster the confidence in the backend