Posted 1:10 PM ET | Comments 4
Everybody is quick to jump all over Gainey for the habs misfortunes. I for one, am guilty of this homerness.

Lets take a look at what he has done:

2003 (the beginning of the Kovalev era), Bob Gainey takes over the GM position from Andre Savard.

Bob Gainey acquires Alexai Kovalev for Josef Balej and a 2nd round pick at the trade deadline.

I don't have to retell the whole story that is Kovalev. But allow me to indulge a little, since I'm still young and have never been privileged to watch a better hockey player than Kovalev lace em' up for the Habs.

Kovalev really didn't do much his first 12 games ( the remainder of the season)with the habs, scoring only 3 points. It was that years playoffs that Kovalev really started to show us his excellence; notching 6 goals and 10 points in 11 playoff games.

Gainey resigned Kovalev to a four year deal worth 4.5 Million a season the following summer. I know many habs fans didn't like the inconsistency that Kovalev had during his four seasons as a hab, but nobody can forget the 2007-08 edition of the habs. The Montreal Canadiens finished 1st place and for once in a long time the habs seemed like they were headed for a turnaround.

Since I started watching the habs, I never knew a 'good' hockey team. (Over a decade of Petrov, Zholtok, Rucinsky, Bure, Zednik, Brunet, etc...) Our team finally had some talent, and some real magic to the team: 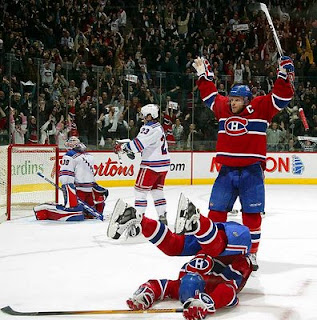 This picture, as a true hab fan would remember, is the game we had the epic comeback against Gomez and his Rangers. Kovalev finished that season with 35 goals and 84 points in 82 games. Looking back at this picture, you can see the magic that this team had. Then it was lost...but let's not get ahead of the timeline too much, back to 2003.

Habs were eliminated in the 2nd round of the playoffs to the eventual Stanley Cup Champions the Tampa Bay Lightning.

Draft table 2003: picking tenth overall, Gainey and his newly assembled Draft team (led by Trevor Timmins) selected the gifted Belrussian Andrei Kostitsyn. It is yet to be determined if Kostitsyn will be a bust or not, though he is playing well of late with a HOT Plekanecs. Kostitsyn, however, has big shoes to follow to live up to his high selection, going ahead of Jeff Carter, Mike Richards, Corey Perry, Ryan Getzlaf and Zach Parise, whom all have become forces in the NHL.

2nd round: Cory Urquhart (Ur-a-who?). This pick was clearly a bust.
2nd round: Maxim Lapierre. A serviceable checking line forward. Maybe not the best hockey player in the world, but he does cause alot of problems for the other team. My opinion of him: would love to package him out of Montreal as he has not been able to adjust to his limited ice-time.
3rd round: Ryan O'byrne. A great pick in the third round, Ryan is currently playing good hockey in the top four paring in Montreal.

ROUND 9: JAROSLAV HALAK. Enough can't be said about him, he is an absolute team player. How long has he been riding the pine and then coming in and being lights out for the habs? This season he is making a name for himself, and raising his trade value for our organization. I think Price is a better goalie, but if we can turn a 9th round pick into a top six forward, I'd say good job Gainey!

Lockout: Gainey gets rid of the following:

Finally the habs had rid themselves of 7 fourth liners, and three below average blue liners. The days of complete B/S were slowly coming to an end.


2005-06: This was the season that Gainey shipped Theodore to Colorado for Aebischer. Great trade, we traded a big cap hit backup (at best, imo) goaler for a decent backup.

Habs make the playoffs and are eliminated in the first round by eventual Stanley Cup winners Carolina Hurricanes.

For those of you who don't know french, Montreal traded Ribeiro to Dallas for Niinamaa.
http://hfboards.com/showthread.php?t=295017
Another interesting link of what some habs fans over at hfboards thought of the trade at the time.

Ribeiro was a cancer, and yes in Hindsight Gainey looks like an idiot. Nobody thought Ribeiro would be as productive in Dallas as he has become. Hindsight makes us all look like geniuses. Gainey clearly made a major mistake.

This was the season we finished first place overall in the Eastern Conference. Led by Alex Kovalev and Thomas Plekenecs.

Huet traded to Washington for a 2009 2nd round pick.

"This is a risk-reward that we, I, have decided to take," Gainey said, "They're not [playoff]experienced but they are quality players … It was a very clear and distinct decision to allow our goaltending net to be available to what we feel are two premier young goalies.
"We definitely see our future in goal being with one of these two goalies, and maybe both of them in some tandem aspect."

This was the same trade deadline that Gainey shot for Hossa but lost out to the high bid of the Pittsburgh Penguins.

The Habs ended up losing in the second round of the playoffs to the Philadelphia Flyers.

Habs were busy at the draft this time around, not drafting but in the rumours.

Gainey trades their 1st round selection to the Calgary Flames for Tanguay. And makes a deal with the Leafs for the negotiating rights to Mats Sundin. We all know how the Sundin saga turned out: signed in Vancouver and didn't do much at all.

I really liked the Tanguay deal at the time. We got a talented winger who had scored more than 70 points four times in his career and at the time was only one year removed from his career high 81 points with the Flames. Hindsight remains to be a female dog.

One year removed from finishing first, Gainey adds Tanguay to the mix. Robert Lang replaces Smolinski as our third line center. Our team overall had improved greatly, however losing Streit was a greater impact than anybody could really predict. The habs crumbled and barely squeaked into the playoffs.

Losing in the first round to the Philadelphia Flyers.

Culture change.
"Everybody remembers him playing in the Stanley Cup Finals when he had two separated shoulders," says Demers. "[Bob Gainey] represents what Montreal Canadiens hockey is."

Gainey wanted to bring back the old ways (Proud, hardworking players), and wanted to instill a defense first system. He hired defensive mind Jacques Martin as head coach. Made a trade for Gomez. Signed Gionta and Cammalleri up front and Gill, Spacek, Mara and Bergeron (later in the season) on the back end. On paper, this season's habs seem much better than last seasons.

Another notable move Gainey made was picking Metropolit off waivers.

This isn't the most articulate blog, but it got something off my chest that has been bothering me: Gainey is not a bad GM.

His drafting has been decent, with some late round steals. His pickups of Schneider last year and Bergeron this year to help the PP out were both brilliant. He's lost a few trades (Ribeiro) but won some good ones (Garon for Huet, Rivet for Gorges and Pacioretty). He has also let some guys get away via free agency when he should have dealt them at the deadline (Souray). No GM is perfect. Gainey is no exception, but I believe he has done a decent job of keeping us competitive without having to rebuild ala Penguins.

Be thankful that the days of Petrov and Brian Savage are behind us.
My two cents. zzzzzz
Filed Under:   Montreal   Canadiens   Habs   habs   Price   Gainey   Timmins

January 14, 2010 1:47 PM ET | Delete
Good blog. Besides Gainey's Homer approach to not trying to re-sign his pending UFA's before the season ends. He has done some good work.
blarneylad