The Last Hurrah for the Unexpected Elite

Posted 7:56 PM ET | Comments 0
Would anyone have expected the then-Mighty Ducks of Anaheim to be perennial elites of the league when the expansion franchise was granted in 1993?

Their uniforms were atrocious. Their lineup was laughable. They owed their existence to a campy Disney movie.

Hardly the makings of a champion franchise.

Even the Kariya-Rucchin-Selanne line, easily among the best forward lines in the NHL in the 1990's, couldn't elevate them to the status of contenders - they qualified for the playoffs only twice in the decade, advancing past the quarterfinals only once to be swept by the Detroit Red Wings. 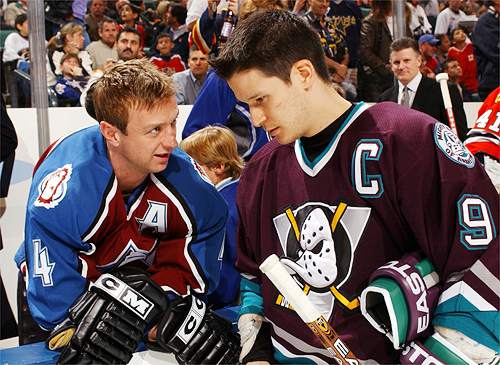 And after their cinderella run to the cup in 2002-2003? With franchise darling and long-time captain Paul Kariya gone, the future did not look bright in Anaheim. Not even the addition of Sergei Fedorov and Vaclav Prospal could propel them back into the postseason, and they finished 2003-2004 well below .500 and sitting a dismal 4th in the Pacific Division.

Two seasons (three years, with the lockout) after such a disappointing finish, Scott Niedermayer - nemesis of the Ducks in their last trip to the Stanley Cup Finals - hoisted the Cup for the first time in franchise history.

One can easily point to the strong drafting of Brian Murray (netting Corey Perry and Ryan Getzlaf) and the aggressive management of Brian Burke for why the Cup came to Anaheim.

But that squad is all but gone. The Ducks, still elite, are in a critical place for the franchise. True powerhouses can't be made solely by a series of rental players on short contracts - while they play a part, winning franchises like the Red Wings have the framework of a champion franchise (Zetterberg, Datsyuk, Lidstrom, Holmstrom, Franzen) locked up in long term contracts.

When the Cup squad is all but gone and the glory of that success fades, the best franchises are marked by their ability to maintain competitiveness. Such could easily be said of the best of NHL dynasties - one of the only players to span the entire Red Wings dynasty is Nicklas Lidstrom. The rest was done with strong drafting, prudent action in free agency, and masterful management in locking up franchise building blocks in long-term contracts.

Waxing philosophical aside, let's look at the recent moves. Travis Moen, Kent Huskins, and Samuel Pahlsson - all scheduled to be free agents - were dealt at the trade deadline by new Ducks GM Bob Murray, along with Steve Montador and Chris Kunitz. Smart moves to net NHL-ready players that could more reasonably be signed in the offseason, or were under contract - and smart moves that paid off, as the Ducks finished an incredible late season streak to squeak into the playoffs, knocking off the President's Trophy San Jose Sharks and pushing Detroit to game 7 of the semifinals. All good moves to shore up the future of the franchise.

But it's going to take more than that.

This gives them a grand total of 20.79 million in cap maneuvering room (assuming no major moves to dump cap) - less, if the cap decreases as expected. Barring a sophomore slump, Bobby Ryan will command a significant pay raise on the order of Getzlaf and Perry's contracts, in the ballpark of 5 million in cap hits per season. James Wisniewski will likely command a pay raise - after all, his arbitration with the team was only staved off by the signing of a slightly smaller one year contract. Jonas Hiller will command a significant pay raise after starter-quality performance in the 2008-2009 season, assuming it continues.

So what will be sacrificed? Will Bobby Ryan leave Anaheim? Extending his contract won't easily allow the Ducks to make the sort of big money free agent splash they'll need for a defenseman to replace Scott Niedermayer - will this mean that the Ducks defense-first mentality will fall by the wayside, as their cap situation will allow them less room to stock the blue line?

It's already started, to some degree. The Ducks addressed their secondary scoring woes by shipping Chris Pronger for Joffrey Lupul, a one-time Duck, and Luca Sbisa - at the expense of their once-feared blueline. While it seems that Pronger is on the decline, and the indication seems to be that the Ducks got the better of the trade, it remains to be seen whether it was worth it.

Or will it result in the trade of Jean-Sebastien Giguere, a long-time favorite for his Conn Smythe performance in 2002-2003 and subsequent elite play for the Ducks? After he hit a rough patch in 2008-2009 and Jonas Hiller seized the starting position, his status with the Ducks has been a source of constant rumors. It seems unlikely that the Ducks will solve their goaltending issues by waiving Jonas Hiller like they did Ilya Bryzgalov in the 2007-2008 season - to begin with, no prospects in the Ducks system are ready to make the transition to backing up Giguere on the NHL level, and Giguere's best years are likely behind him. The 2009-2010 season represents one of the last chances for the Ducks to make a splash before their champion squad is all but gone to retirement, trade, or free agency. Regardless of their performance this coming season - and it looks on paper like it may be one to remember - it's all but certain that the next offseason will be a critical point for the franchise's future.
Filed Under:   rebuilding   Anaheim Ducks   offseason   NHL   Ryan   Giguere

July 2009
31 The Last Hurrah for the Unexpected Elite

August 2009
05 The New-Look Ducks
05 Getzlaf likely to miss beginning of Training Camp
05 A brighter than expected future in Buffalo, NY
07 The DiPenta Effect
09 A (reluctant) defense of the NHL Board of Governors