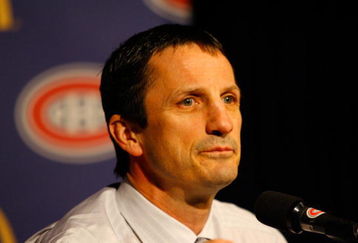 After the Canadiens' fourth consecutive loss against the Oilers yesterday, it is clear that the Canadiens players don't want to play for their coach anymore. They have lost nine of their past 11 games, during which they scored only 25 goals (2.27 GF per game) and surrendered an astounding 48 goals (4.36 GA per game).

The Habs have lost their last seven road games and have still four road games to go before returning home on Feb. 21 against Ottawa.

Carbonneau keeps juggling his lines like a Cirque du Soleil juggler, trying to find some chemistry among his players, but since they don't play together for more than a few shifts, it's hard to build chemistry.

Carbonneau doesn't have a game plan. The Canadiens don't fore-check, can't make a good first pass, are unable to clear the front of the net, don't finish their checks, and don't win one-on-one battles. They clearly need to go back to basics; however, they don't practice. Carbonneau prefers sending them to a bowling alley to hone their shooting skills.

The Canadiens are lucky to have registered that many points this season, because they've been sloppy most of the season, but they have been able to win some games because of their talent. The problem is that the farther we get into the season, the harder it is to win games without working, and the Canadiens don't work. As soon as they get scored on, they stop hustling and playing hard; they simply give up.

When you give up, it means you don't care, and that's the job of the coach to make the players care, which is not happening right now.

I know that Bob Gainey and Guy Carbonneau are close friends, but it's time to put an end to their working relationship, especially since Gainey can't find a trading partner just yet because of the salary cap. We are still three weeks away from the deadline, and the Canadiens can't afford to wait that long to make changes.

The Senators waited way too long before canning Craig Hartsburg, as I had predicted on Jan. 7, 2009 here > http://bleacherreport.com...artsburg-on-their-way-out(Hartsburg was fired at the beginning of February).

GM Bob Gainey must make his move NOW! Time to put a veteran coach behind the bench—someone with extensive experience like Larry Robinson, Bob Hartley, or John Tortorella.

February 12, 2009 7:32 PM ET | Delete
Yeah Tortorella is a great idea. Comon, guive me a break. A panick move will not help this team and there is no easy solution. Changing coachs is overated and there was a good article on that topic on Hockeybuzz. The thing is, it never really change a guiving situation, not in a short period of time. If this team is suppose to fail, it will, no matter who is behind the bench. If a changing of the gard is needed (and it might be), then do it in the offseason. And if Carbo is canned, Gainey must go. Carbo was his man all the way and like it or not, Gainey is the one who put that team in place. He must be held responsable.
fangwall

February 12, 2009 8:32 PM ET | Delete
The only possible way for Bob to fire Guy is for him to come down behind the bench again. I have no problems with him bringing in a Larry Robinson if available or other experienced coach to help the bench through this storm.This is the Habs 100th Season. It's showtime and Bob has to stop dithering. It's time to separate the men from the boys.
deadpoulet

February 12, 2009 9:58 PM ET | Delete
If Gainey does come down to coach, will he have the time to make some deals? Cause this team needs some fresh air on the ice.
Dave_Poulin

February 13, 2009 9:54 AM ET | Delete
Slasher,It is good writing, but you are a passionate individual with mood fluctuation. In the long run, it is better to keep Carbonneau. It is however Bob Gainey and Carbonneau to pinpoint the problem individual and act... Act with solutions.A couple added pieces to the team puzzle would have exponential benfits. More than a Coach change would have.
Oilhab

February 13, 2009 6:18 PM ET | Delete
I think this about somes up where you went wrong."Carbonneau doesn't have a game plan. The Canadiens don't fore-check, can't make a good first pass, are unable to clear the front of the net, don't finish their checks, and don't win one-on-one battles. They clearly need to go back to basics; however, they don't practice"Everything you said there other then Carbo doesn't have a game plan is the players fault not the coach, the coach can only tell them what to do, it is up to the players to f'n do it. They are not. As far as Not going to practice and going Bowling one time. Gime me a break, these guys are not children, missing one practice in order to hopefully get there mind away from the pressure of the rink and their struggles is not going to affect them one way or another. They had been practicing everyday since September. They weren't going to learn anything new in one practice. Bagging them wasn't going to teach them anything. They now what they have to do to follow the system by this point, they just need to do it.If you really want some one to blame, blame the players on the ice.They know what they should be doing the just need to do it
Wingsfan61

February 13, 2009 7:33 PM ET | Delete
Take it easy, Slasher. It's not the end of the world or of the Habs season. All teams go through losing streaks and they all come out of them. The Red Wings just went through a 5 game losing streak and alot of Wings fans here were wailing and gnashing their teeth over it. Thought it was the end of time as we knew it. Fire Babcock, trade this guy cause he's a dud. Trade for that guy and our prayers are answered. Now, the Wings have won 6 straight and everybody's happy, like the losing streak never happened. Just keep cheering your team on, that's all you can do. The Habs will come out of it and they just might peak at the right time and have a long playoff run. Be nice to have a Wings-Canadiens final, wouldn't it?

December 2008
01 A look at Brian Burke's probable moves before the deadline
03 Laviolette fired; Hartsburg might be next
04 Bad blood between Latendresse and Carbonneau?
10 Time for D'Agostini to get an apartment in Montreal
12 What's wrong with Antoine Vermette?
15 Is the Price really right?
18 David Krejci's unexpected rise to stardom

January 2009
05 Why The Kostitsyn Brothers Should Stick Together
09 Pacioretty And Gorges; a Look at Craig Rivet's Trade By Bob