The Stanley Cup Finals, Tragically Hip? and Sid gets the C! 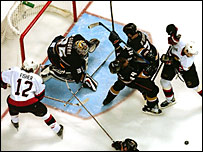 I was really disappointed with Ottawa the other night, Emery was stellar as usual but the Alfredsson, Spezza and Heatley line were flat, their confidence looked really shaken!

I don't agree with many hockey pundits riding Joe Corvo and putting some of the blame on the guy for the Game Winning Goal. Corvo is a great guy and has played well during the postseason, he moves the puck well and mans the point effectively, not to mention 8 points in the post season so far (tied for 4th - Ott). Talking of Pahlsson, what has this guy been drinking this year?? Whatever it is i want some, and i'd send a case to Bryan McCabe while i'm at it! Wow! This guy is great!

I can't say enough about Jean Sebastien Giguere. Giggy has turned on the style this post-season. Kinda surprising that he's getting all the plaudits at the moment, its as if he's come out of nowhere or something, had we forgotten the 2003 Stanley Cup Final?? We sure as hell won't forget him after this time. Pahlsson for the MVP though, hes made a huge contribution, but Giggy being the goalie will get the most notoriety and he'll get the MVP in the end, not that he dosen't deserve it mind you.

I honestly thought that Ottawa had the better depth, and i guess they did too, but i'm sure those two games at Honda Center have burst that bubble! They just can't seem to get anything going at the moment, the ducks are smothering them.

Despite my disappointment, i kinda found myself casting a wry smile at some points of the game the other night. It really reminds me of how my beloved Leafs used to beat on Ottawa, by beating them literally! I'm sure Murray and Muckler are thinking of what should have been had they got Roberts at the trade deadline. Would he have made a difference? Maybe not at any point previously in the playoffs, but they sure as hell coulda used his great, toughness and determination in the face of adversity in this final.

Hopefully home ice should make a difference. But thats the only advantage i can think of at the moment that supposed "checking line" of pahlsson, moen and neidermayer is killing em!

I still think Ottawa's gonna take this cup, Scotiabank Place on saturday will see the turning point in this series! Its gonna be more difficult for Carlyle to match his lines and from the look of game two Neil and Fisher are finally stepping up their physical prescence to combat that of Anaheim. And interesting final, that i feel is going to the wire!

Mats Sundin emerged Thursday from a follow-up examination of his hip with doctor Marc Philippon at the Steadman Clinic in Vail, Colorado with the same recommendation as the Swedish specialist Sundin saw earlier this month.

Hip surgery is not required!

With the question marks over Mats' health now firmly shoved out of the way, the contract talks can finally take centre stage.

The Leafs have a team option on Sundin's existing deal that would pay him $4.56 million US next season and cost the team $6.33 million US in cap space. So naturally its beneficial for both parties to settle on a figure less than 6 bucks 33, Mats gets a raise and the leafs free some cap space.

I expect them to come in at around $5.75 million and a two year deal is rumoured to be a cert. The question marks are largely surrounding for how long, rather than IF or how long.

I don't debate Mat's worth to this team for a second, i feel its imperative he return to the club next year, but it does irk me the disparity at the club in terms of salary. Surely the best player on any team should be duly paid. Is Bryan McCabe worth more to the Maple Leafs than Mats Sundin?

Don't get me wrong i was in favour of bringing McCabe back, and i understand the competition out there on the free agent market, when you have one guy and two buyers. But for sure he's overpaid for what he brings to this hockey club, as is Kubina and to be honest i feel Ponikarovsky got too much a few weeks back. Now i understand that your probably sitting here and thinking but they've already overpaid a number of guys, why the hell should we not take the chance when a star player is willing to take less money. I understand that such a move only compounds those original mistakes but i can't help but feel were cheating a guy whose given so much to this organisation. Do the leafs not have an obligation to pay Mats what he deserves? I'd be interested to hear what you think.

It was only a matter of time before Sid the Kid was given that very heavy C to wear on his uniform. Is it too early?? Dosen't he have enough pressure on him to be the next Gretzky? Can he handle it?

If we look at some of the young captaincy's in recent NHL history their a mixed bunch. Vinny Lecavilier for example was given the captaincy in they year 2000, the youngest full-time captain in NHL history and he wilted under pressure. Under performing by his high standards and conflict with his coach eventually led to him being stripped of the C a year later.

On the other end of the scale, Steve Yzerman, who had the 'Youngest Captain Ever' title before Lecavilier, was given the C at 21 years of age and it never phased him one bit. In fact it was the beginning of his meteoric rise to the captain marvel we all remember and love.

In many ways its just a marketing ploy, Sid the face of the Penguins and more importantly the NHL! Its all about maximising his exposure. Afterall were in the midst of the Stanley Cup Final, whats the rush for this decision? Lifting that Art Ross in Ottawa soon wouldn't have anything to do with it....would it?

I think Sid is very much of the mold of a Stevie Y and will take to this like a duck to water. Hes an awesome talent, its just imperative that he leads by example with his talent and not the childish chirping we've come accustomed to at times, perhaps the C will do that.

Thanks for reading, any feedback and your opinions on matters discussed in this blog would be much appreciated.

I wanted to take a little time to talk about the possible relocation of the Predators and the whole Hamilton/Kitchener/Waterloo situation, but sadly due to time constraints i've been unable to do so. I will however include this in my next blog.