Hockey season is nearly upon us once again, pre-season training camps and exhibition schedules are in full swing, fantasy hockey drafts are the talk of the work place and hockey fans everyway wait with baited breath for that first puck to drop on the 07/08 NHL season.

For once i'm happy to say that here in Ireland and the UK, people are actually talking about Hockey, its in the papers, its on TV. Don't get me wrong we are no strangers to hockey (I'll leave my "Bobby Orr's roots in Ireland" story for another blog), there is a cult following to the game, a small but passionate, not to mention sleep deprivated (due to time differences Live games such as those on Hockey Night in Canada begin around Midnight!) fanbase exists in the country, though certainly starved for high quality hockey. 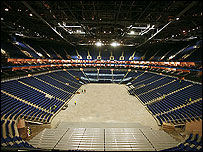 I've got my tickets and my flights booked, i will be at the 02 Arena next week, keen as mustard to see Nagy, Frolov, Giguere &#038; Bertuzzi at their finest, it will be a proud moment for hockey in these parts and hopefully for the NHL as well.

Though not everyone is so happy about the NHL Premiere. Recent reports that the NHL has ignored advances by the local governing body Ice Hockey UK to help turn the weekend into a showcase of the local game as well as the NHL, have left a bitter taste in the mouths of many involved in the game in the UK and Ireland.

Ice Hockey UK are understanably embarrassed that the NHL has ignored them, and it underlines the NHL's main aim in all of this - to sell their league and their merchandise to us!

I guess it is sort of comparable to owning a small local shop and suddenly finding a Tesco or Walmart opening across the road. 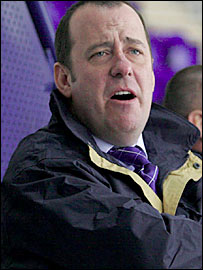 Its a nice idea and i understand why IHUK would be seething over the matter. But at the same time i can't bear to think of just how dire a british hockey game would look up against an NHL game, i'm embarrased enough about the state of the beloved game in these parts without letting a large portion of the world know about it.

But what do you think? Do the NHL have a responsibility to respect the local bodies of hockey? Afterall these guys work tirelessly to promote the game 365 days a year, the NHL will swoop in to a big fanfare and flashing lights, soak up the cash and hit the road. On the other hand local hockey has failed to capture the imagination of the masses, perhaps premier hockey events such as this will change that, perhaps it will have the desired knock on effect on the nation inspiring kids to play the game and increasing the popularity at local level.

I cant help but think - Would this have happened in Russia, Sweden or Finland?? Somehow i doubt it.
Filed Under:   UK Hockey   Irish Hockey   NHL   NHL Premier   London   O2 Arena

September 23, 2007 12:18 AM ET | Delete
totally agree with above. i know its exciting over there but it is just one big hassle for all the players involved. especially it being teams from the west coast having to travel half way around the world. if i were a ducks or kings fan i would be pissed to lose a home game out of this. it will not help or hurt the nhl. theres no point.
blueline

September 23, 2007 1:37 AM ET | Delete
Agree with above comments, but I think what the British hockey league and Raymullan's blog wanted to convey was their dissapointment in a lack of recognition from the NHL (as a way to help bolster attempts to enhance their own league). Since the NHL decided (for whatever ridiculous reasons) to play the game there, why not let the Brit hockey aficionados ride the promotional coattails of the NHL? (Meanwhile, the NHL has NO business trying to establish any kind of cross pond games. As GG95 says, it's a huge hassle for the players and fans. It's silly.)
ladynic

September 23, 2007 12:18 PM ET | Delete
The NHL on the world stage is fine in the Olympics but stuff like this Bettman is trying to go further then Nascars little forays into mexico and Canada. I think he wants to say see the world wants us which is all well and good but if you don't help the locals in getting a share of the lime light then I think you look really stupid. Nascar let local mexican and Canadian driver get rides for the race so that they would be included in the competition. Maybe NHL needs to pay attention. Give the locals something or someone to cheer for that understand where they come from. The nhl should even be over there anyway. Let's fix our market issues here first. Let's get all teams selling out 90% of their games and then seek out new venues.
glucker

September 23, 2007 4:38 PM ET | Delete
I would like to see a european nhl conference, and an extra round in the playoffs... the euro and na teams don't face each other till the stanley cup final... having NHL teams in Europe will make it easier for euro talent to get into the nhl
FrankD

September 24, 2007 1:14 AM ET | Delete
We have international levels of play for a reason, so the NHL can all other leagues can stand alone and single-handedly represent one another in inter-league play. I don't think playing overseas is good marketing because as raymullan mentioned in his blog, games don't start there until almost midnight. It's just the oversea ice bowl - a grand marketing scheme and nothing more.
TheTiny

September 24, 2007 4:36 AM ET | Delete
they are selling the game over seas, and thats a good thing, NBA has done it, now over 65% of their viewers and merchandice is all outside of North America. NHL has a lot of international players and we should market them more to thier specific countries. I know that the arival of Kopitar has sparked a HUGE interest in NHL in Slovenia, same with Vanek in Austria. If they wanna create another division/conference why not, just have the teams play a few times on a long road trip or something.
arwilson529

September 24, 2007 8:38 AM ET | Delete
Of all sports in the US, hockey will translate the best and thrive in the European market. Putting on a game there makes a lot of sense just from a marketing stand point. Though I agree that it shouldn't be two West Coast teams. Put the Rangers and Islanders over there. Playing a game or two across the pond could bode well for the relationship between the international leagues and the NHL too.It would make perfect sense to me to let the UK league play beforehand. Its good for sustaining the interest in the sport. Show their game, "See, support these guys, and then you also have the big league in the US too." Not everyone is diehard enough yet to watch NHL games at midnight, but getting the interest built with the local teams is a good starting point. With the NHL struggling as it is in the US, getting a potential small revenue stream from overseas would be a decent boon to the league.
lush

September 25, 2007 1:11 PM ET | Delete
When premiership teams come to North America we don't ask for Canadian exhibition matches to take place prior to kickoff. In fact most people in Vancouver were forced to buy Whitecaps season tickets just to go see Man U play in Seattle a few years ago. If the Brits were smart they'd do the same thing for people wanting tickets to these NHL games. I'm told they sold out rather quickly as well.