Boo Birds for Blue and White 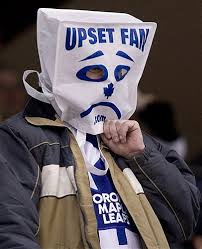 In a season where everyone either predicted or was warned the Leafs would place bottom 5 in the East, I'm a little surprised the team was booed by the club's faithful fans in a tilt with the Nashville Predators.

As of today, right now, this very second… (this second too) the Leafs sit uncomfortably in the 11th seed in the East (43GP 38P); it's a position that is so good for the Leafs that they are only 2 points ahead of this year's "2001: A NY Rangers Odyssey", the Tampa Bay Lightning - alright, they aren’t AS bad as the team the Rangers iced at the turn of the century, but still, stating the Bolts are underachieving is a gross understatement. The position is also good for the 6th overall pick if the draft were to commence today.

That's right; only 1 team in the West is lower than the Leafs in the Standings - the St. Louis Blues. The best part about that is the Leafs former general manager, Cliff Fletcher, traded them a package deal of Steen and Colaiacovo for Stempniak. The Blues won the deal, got better, and could be both the best and worst trade Fletcher made for the club. Reasons for both: Worst = Colaiacovo, when healthy, can be the team's number 2 go to guy. Steen could very well become a Selke winner and is comparable to Lehtinen when he's on his game. Stempniak, on the other hand, has yet to achieve much of anything. Best = Both players continue to play strong and injury free for the Blues, helping them to a better record and passing the Leafs in the Standings to give Toronto a top 5 pick. Hey, it could happen.

The Leafs were ready for a failing season, while advertizing a ton of youth in the lineup. They were expecting a dedicated following despite a potential 1984/85-like season (80GP 48P), but then something happened; something along the way interfered with this plan. Oh, right, they kicked off the year with a win against the defending Stanley Cup Champions and people began celebrating. Fast-forward 3 months and the Leafs go on a bit of a losing skid until they face the 12th in the West Nashville Predators. What happens? The Leafs are outshot 23-17, take shots from the side, are pushed out from the front of the net easy, and looked slow in the process. They are shutout 2-0 by Nashville and rookie goaltender, Pekka Rinne, and the crowd boos the team off the ice (to be fair, the boos started with around 5:00 minutes to go in the third period).

On the game itself, consider the following (all stats include last night's game):

Leafs were outshot, on a weaker goaltender, 23-17. That's 6 more shots on the weaker tender who’s save percentage is far less than his counterpart. The size of the goaltenders also plays a factor:

In their last ten games, Toronto has a 2-8-0 record, while Nashville has a 4-6-0 record. Nashville has been the better team lately, and with the return of Steve Sullivan, they only got better. If you look at the top lines for each team, based on time on ice, Nashville also has a stronger unit for two-way hockey.

Now, add to Toronto's weaker goaltending in comparison to Nashville, and it's obvious why the team not only lost to Nashville, but is losing in general. This is not to state Toronto is terrible, it's to state Toronto is terrible defensively compared to the opposition. If you consider the players Toronto ices the most in a game have a combined -32 rating, the likelihood is the Leafs will be scored on as opposed to scoring.

So why the booing? At the half way mark of the year, you’d have to know by now the Leafs are, at best, a mediocre team. Losing in a close, albeit boring, game 2-0 to a team you're close to in the Standings is on par with the productivity of the team. The clubs Toronto is losing to are teams you already knew were better going into the match. Perhaps it's the glimmer of hope the Leafs gave to those who were on the fence coming into the season with a win over Detroit, or maybe the few goal-scoring duels the Leafs put up in early December. Or maybe the fans who are paying the price of a unicorn for a ticket are people who have only watched the games on TV that the Leafs won and are oblivious to the other side of the quarter. I would hope they were booing at the fact they had to first, find a unicorn (which is a long and dangerous process), then somehow devise a plan on how to trap it, and finally trade it for a ticket to see the Leafs lose a boring game to Nashville. I'd probably boo too. The price of admission compared to the product is worse than $3.95+tax for a pet rock in 1975. But if the fans were booing because the Leafs lost, the only thought that crosses my mind is, "really?"

To quote Ron Wilson, "when you're not blessed with a lot of talent there will be inconsistencies". Inconsistencies are the main component of a mediocre team – the team we all knew the Leafs would be.