Posted 4:20 PM ET | Comments 0
Sunday afternoon the WHL Vancouver Giants -- coached by my old friend of more than thirty years, Don "Hayzer" Hay -- will be playing for junior hockey's ultimate prize, the Memorial Cup, against the Medicine Hat Tigers before a no doubt sold out house at the Pacific Coliseum in Vancouver, B.C.. Over the past few months, the Giants have become the favorite of the regulars in the HockeyBuzz chatroom who have been joining together for each WHL playoff and Memorial Cup game in which they have participated this Spring to follow their exploits with the help of the Giants spectacular play-by-play voice, Joey Kenward. Sunday afternoon we will all gather again at 4PM EDT (1PM PDT) to listen to Joey call the Memorial Cup title on CKNW (via internet audio stream), living and dying with the Giants on every shift as they seek both to avenge the seventh game, double-overtime loss to the Tigers in MH two weeks ago in the WHL Finals -- and in doing so to also bring the 89th Memorial Cup championship to Vancouver!

Good luck to the Giants from all your friends and fans in the HockeyBuzz.com Chatroom! 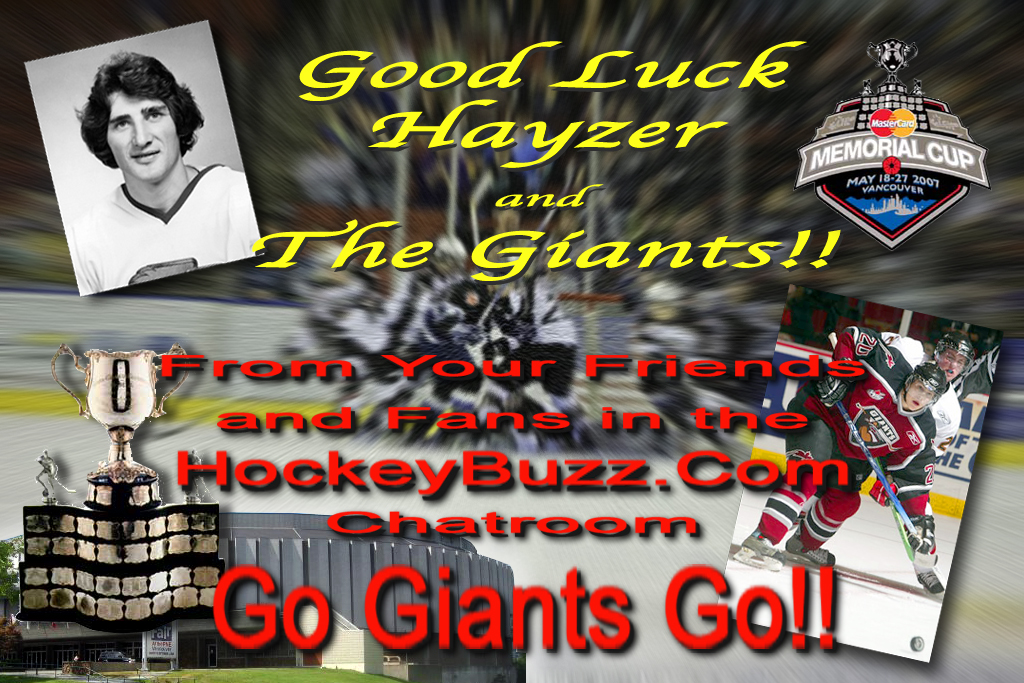 I have forwarded the above image (which I created) to Joey with the request that it be printed out and passed on to Hayzer to be posted in the Giants' lockerroom for the game on Sunday.
Filed Under:   giants   memorial cup