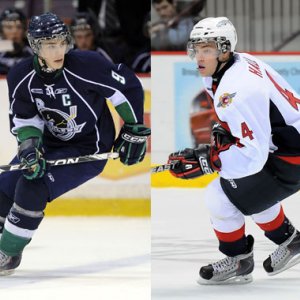 For the last few month since January when everyone pretty much knew that the Edmonton Oilers were going to finish out of the playoffs and most likely in 30th Place in the NHL. Everyone’s been wondering who the Oilers were going to take, Taylor or Tyler. Some have said the Oilers would be dumb not to pick Taylor Hall on Friday because he won back to back Memorial Cup MVP’s. But Tyler Seguin is a center and the Oiler need a number one center. They also need a superstar scorer which Hall could turn out to be.

Jason Speeza has been rumor to be coming to Edmonton for the same three players the Oilers tried to trade for Dany Heatley. I was not in favour of getting Heatley but am for Speeza. What if the Oilers traded Dustin Penner, Andrew Cogliano and Ladislav Smid for Jason Speeza and then draft Taylor Hall, would that work. The Oilers said they know who they are drafting already. The Oilers also said they were not going to try to hit “The Home Run” in free agenty. They have a bunch of young players including Jordan Eberle, MPS, Omark, and then add the 1st overall pick plus Sam Gagner, and Ales Hemsky. It could be a team that will be fun to watch.

I also would love to see the Oilers draft Jordan Weal in the 2nd round. One of the reason being that he played on the same line with Eberle with the Pats from the WHL and they played good together. Maybe they could have a line of Taylor Hall(if he is drafted) Jordan Weal and Jordan Eberle. Plus Jordan Eberle has also played on the same line with Taylor Hall when they both played for Team Canada at the Juniors.

Back to the Taylor Hall and Tyler Seguin, I agree that both of them are can’t miss with either of these players and they are going to be superstars in the NHL in a few years. If it’s Hall then they will get a awesome scoring winger and if they pick Seguin then they get a playmaking center. So again if you were GM of the Oiler who would you pick Taylor or Tyler. Enjoy the Draft Everyone!!!!
Filed Under:   Edmonton Oilers   Taylor Hall   Tyler Seguin   Draft