Umberger Has a Point...

Posted 3:28 AM ET | Comments 1
RJ Umberger publicly vented a bit of frustration before game one in Washington on Friday. He commented about being put on the fourth line. 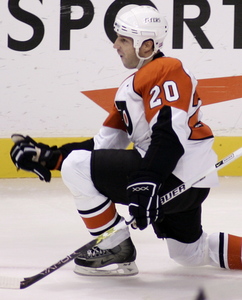 "I don't know what he thinks because I haven't talked to him," Umberger said, referring to coach John Stevens. "Apparently, he doesn't think I'm good enough. I don't know."


While it's not adviseable to make snide remarks in regards to your coach to the public, especially at a critical time, his sarcastic tinged comments raise a legitimate point.*
(* Note, RJ also made some other comments that were more, let's say, "politically correct", see link:
http://www.courierpostonl...S03/804110377/1002/SPORTS )

RJ, who put up 50 points in 72 regular season games, had been playing on Briere's line before his injury with mixed results. Hartnell jumped in when RJ went out and has done well as the "new Knuble" on that line... I can understand not swapping back in RJ for Hartnell, but there was (still is) a perfect opportunity to reunite him with Mike Richards and Joffrey Lupul, the linemates he thrived with during an impressive regular season stretch...Stevens chose to keep the feisty checker Patrick Thoresen up with that line and push Umby all the way back to the fourth line (and the low minutes that come with that). This is not only insulting to RJ, but it's a questionable strategy by Stevens and the coaching staff. Stevens tried to defend his decision:

"Right now, I like the way the other lines have meshed in, and Umbie is the kind of utility guy that moves all over," Stevens said. "Before the game is over, he could be on all four lines. It's a role we used him in before and have gotten a lot of production out of R.J."


Well, the way it played out, RJ the "utility guy" wasn't "utilized" very much and he played an unfamiliar role, with players not as skilled as he is, and was largely ineffective. In contrast to Steven's statements, it seems to me that RJ's fourth line placement, was, if not intentional, a de-facto demotion. He saw limited action and, in fact, played the least amount of icetime (except for the game he got injured) he has all season at 12:22. Meanwhile, Thoresen, who put up a meager 8 in 30+ games this season, get's prime time with two top skilled players...sure he worked hard, but didn't do anything to put points on the board despite being paired with some of the most potent scorers on the team. It is critical we get secondary scoring from the Richards and Carter lines...Thoresen is the new Kapanen, snakes attached to his hands and all.

Hey, don't get me wrong, Thor is a warrior... worthy of his namesake, the God of Thunder, who even in his own greatness, never had to endure the epic pains of getting hit in the nads with a slapshot...intense and tenacious, and tough as balls... I love him, but his line didn't produce, yet again. I think he has some offensive talent, he put up big numbers in junior... and at 24, he's still developing his NHL game. but at this stage of the game it seems his scoring skills aren't refined enough and he doesn't seem to be meld with Richards and Lupul in a way that produces goals... meanwhile, RJ Umberger is a competent producer and has proven chemistry with those two, he should be playing with them. When they were together earlier this year it was one of the most productive times all season for all the players involved. How about this scoresheet from a game when they were together aginst a tough Penguin team:

That wasn't the only game where they clicked. I forget what broke up the line originally, perhaps Lupul's injury? Whatever it was, the line should have been reunited once they were all healthy.

-It's obvious that RJ should be playing a top nine spot on this team.
-It's obvious there was good chemistry on that line with Richards and Lupul.
-It's obvious Richards' and Lupul's production while playing with Thoresen is little to nothing compared to what it was when they had Umberger with them.
-It's not obvious why Stevens doesn't see it this way.

Stevens should put RJ back with Richards and Lupul. Kapanen, Thoresen, Downie would be a fine fourth checking line...mix in Dowd/Cote as desired. I think Thoresen would work really well as a fourth line center...he works hard, he puts on a solid forecheck... he's one of the most tenacious puck pursuers the Flyers have. Who knows, maybe somehow if he plays with Kapanen, their collective lack of finish will somehow be cancelled out, and things will click?

Roll with this and we rock:

April 13, 2008 8:50 PM ET | Delete
Note: Today RJ was reunited with Richards and Lupul. RJ and the team responded. Umby had the opening, game winning goal and played strong all game. I hope Stevens has enough sense to keep him up there.

April 2007
12 What to do with the Tweeners?
16 Pannaccio Wrong About Joni Pitkanen