Leave Your Coat at the Door...

Posted 1:41 PM ET | Comments 1
Leave your coat at the door, because Psycom is back with some recapping of this long summer out of Islander Country.

On a personal note, I have been hard at work this summer with college classes, work, and the woman who shares my life. I have been watching and waiting for a chance to say what I think about the state of the Islanders and hockey on Long Island. My chance has finally come.

Jason Blake, the tiny spark plug who had enough energy on the ice to light up half of Long Island has taken his show up north to Toronto. They are getting one heck of a player in Jason, I wish him all the luck in the world. Alexei Yashin, can it be true? No contracts that were presented were worthy of you? Come on. Did you really want to go to Russia or have teams finally seen that you are not the player you once were? Good luck in the frozen tundra, Alexei. Kozlov and Poti, I hold no hard feelings towards either of you. I would have loved for the Islanders to keep you, but alas, it was not in the cards. Kozzy, you gave us flashes of the player you are, but not nearly enough. I wanted to give you another year to see if you could become that player for us, but you moved on to Washington. Poti, you were a dynamo on the blueline for us. Losing you hurts us in a big way. A recoverable way, but a big way. You gave us solid games in and out and I wish you the best in Washington. Keep Kozzy in line.

Bill Guerin, a veteran of many seasons, comes to us for the next two years and assumes the captain role vacated by Alexei Yashin. 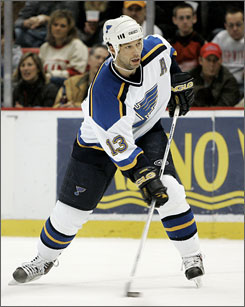 I always liked Guerin, he is a tough customer who is able to put up numbers. He is getting up there in age, but I think he has some gas left in the tank to give the Islanders a true leader on the ice and in the locker room. John Sim, you put up some decent numbers for the Thrashers last season. I think under Nolan you will do nothing but improve on those numbers. He can get blood from a stone and you are that stone, Sim. Mike Comrie. This is your chance, buddy. Prove to yourself and the rest of the NHL that you are able to be a top forward. You may have shown it here or there, but we need you night in and night out. There are no off days. Leave it all on the ice and you will find yourself a permanent home on the Island. If you give us your all, we will gladly accept you. Last but not least, Fedotenko. You had a rocky season with the Lightning last season but still but up some numbers. You will have a bigger role here and you need to show us you are worthy of that contract you signed. I have faith that you can, prove me right, Tank.

We have lost a lot, but I think people are underestimating what we have gotten to replace. We have players with a lot to prove. They will be hungry to show that they can be better than what the critics say. They did it last year, I think they can do it again. With a few more moves, the Islanders are in good shape to be a playoff competitive team. To be honest, I think they can go toe-to-toe today with playoff competitive teams. People are writing off the Islanders already and that is fine with me. It happened last year and we proved our critics wrong. I cant wait to see what this year holds. Lets. Go. Islanders.
Filed Under:   Islanders   Blake   Guerin