Coming in 8th seed with a thrilling shootout win over the New Jersey Devils, the Isles rode 3rd string goaltender Wade Dubielewicz like a great war-horse into 4 straight victories. The team knows the battle has just began and are not overestimating themselves.

Who is this team that shocked the entire city of Toronto? Lets take a quick look: 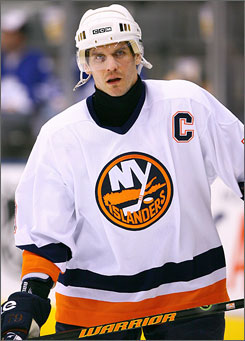 Alexei Yashin - Yashin had a tough year. He stormed into the season hellbent on dispelling the label he, to be honest, earned as a slumping player. At the height of his return to star status, he took a painful knee injury versus Washington. An early comeback attempt just ended up hurting him more, forcing him back into injured reserve for a very long time. Recently returned, Yashin has shown flashes of his early season form and will need to be firing on all cylinders for this series.

Jason Blake - Fiesty. Sparkplug. Energy. These are just three words used to describe the Islanders dimunative forward. Team leader in goals and points, the speedy forward knows only one speed - full. A career 3rd-4th liner until he hit his stride with the Islanders, Blake has been on fire all season. Blake turned in career marks this season and will need that to carry over for the Islanders to be sucessful.

Miroslav Satan - Enigmatic. Streaky. Disappointing. Unfortunately, these are three words that have followed number 81 most of his career. Satan had an up-and-down year where he showed exactly why the Islanders took a chance on him and he showed exactly why the Sabres got rid of him. When Satan is on his game, there are few goaltenders that would say he is not a threat. Satan is going to need to be 100% in the series for the Islanders to advance.

Trent Hunter - Hunter has adapted to coach Ted Nolans system and adapted well. A 20 goal season, marked with him landing 5th in the NHL in hits (246), Hunter has shown what Islanders fans knew all along. Hunter had shown a soft touch around the net in the past, but he finally used his size to his advantage this season. Hunter won the Bobby Nystrom Award this season, given to the Islander that best exemplifies leadership, hustle, and determination. Hunter is going to need to show those 3 traits for the Islanders to be sucessful.

Marc-Andre Bergeron - Not exactly the biggest blueliner in the business, Bergeron makes it up in speed and agility. Oh . . . and his cannon-like shot. Bergeron led all Islander defensemen in goals and points. Aquired in a trade with the Edmonton Oilers, Bergeron was exactly what the Isles defense was lacking, a powerplay leader.

Brendan Witt - The Islanders hard hitting blueliner, Witt led the team in penalty minutes with 131 and was 5th in the NHL in blocked shots with 207. Witt was a horse on the blueline this season and played amazingly against the top lines of almost every team the Islanders faced. Witt is going to have to use that big body and excellent defensive play against the Sabres and try to keep himself out of the box for the Islanders to stay alive.

Wade Dubielewicz - The Islanders knight in shining armor. When Dipietro went down and backup Mike Dunham struggled, Dubielewicz went between the pipes and led the Islanders to the big dance. Dubie, as his teammates and fans call him, showed tremendous poise and skill, leading the Islanders to 4 straight victories, clinching them a playoff birth. With little NHL experience, Dubie has zero NHL playoff time. Don't expect that to phase him, he plays each game like his career depends on it. He is out to show he has what it takes and what better place to do that than in the playoffs.


There is a quick look at the New York Islanders that, minus Dipietro, will be seen in game 1. The Islanders may be 8th, but the Sabres need to pay attention to them and not on the next round. These boys from Long Island have the ability to take them by suprise.

Game on!
Filed Under:   Sabres   Islanders

April 10, 2007 11:57 PM ET | Delete
Good review.I was pulling for the Isles to kill those Devils and make it in. Although, how can you blow a 2 goal lead like that in the 3rd when you're fighting for your playoff lives. Doesn't bode well when you're facing a team that has been known to not quit and has battled back from many many 1, 2, and even 3 goal deficits in the 3rd period.I just need to find tickets to one of these games on LI....I can't find any at the moment!
psycomkl

April 11, 2007 12:12 AM ET | Delete
I am glad you enjoyed! There are always places to get tickets if you look hard enough. I would suggest searching online, there are always people who buy tickets without any plans to even watch the games. Be warned though, they will more than likely try to overcharge you!
LISabresFan61

April 11, 2007 12:29 AM ET | Delete
I know, I've already driven over to the Coliseum to no avail. I've looked at Stubhub and I'll probably have to settle for overpriced tickets. Oh Well, whatever it takes to cheer on my Sabres!
WildMTUFan

April 11, 2007 2:58 AM ET | Delete
I'd maybe wait on that for the second round. The Islanders definetly aren't in any shape to take on the Sabres. The Sabres are well rested and ready for this playoff series, while the Isles will be coming off the wear and tear of a tough playoff battle. I don't think the momentum is quite felt especially when you think of the two goal lead against the Devils, and then realize that their big trade move hasn't produced. I watched the game and felt like there was a huge disappointment when Smyth missed his shootout opportunity. That was an excellent introduction to the Islanders though, learned a lot about some players I didn't really know about, definetly better than most of the articles I've found around the net.
Ed in Westchester

April 12, 2007 10:31 AM ET | Delete
I think Ed in Westchester has it right - Yashin doesn't have a great playoff track record against the Sabres (though all of that was as a Senator) and Satan doesn't have a great playoff track record as part of the Sabres.One concern I'd have......as a Sabres fan is that the team overlooks the Islanders. They have enough weapons to make the Sabres pay. (I donj't see this happening because I believe the team is very focused.)...as an Islanders fan is that the team had to beat an uninspired Devils team to get in and wa taken to a shootout against a goalie that played only 3 or 4 games all season.I think the series will be much closer than a lot of people are expecting. If the Islanders can score first they can really make things tough on the Sabres. However, if they play from behind they'll be forced to open things up a bit and it could get very ugly.
B.D. Gallof