Give me a Center, or get rid of Mr. Regier

Posted 10:44 AM ET | Comments 0
First, my disclaimer, I have been a Sabres fan since as long as I can remember. My first phrase as a child, as far as I've been told, was "I wanna watch hockeysabres" Yes as one word. I do live in Maryland now as I had to sadly move from Buffalo to pursue my career.
The Sabres efforts have been lackadaisical as of late. Everyone from as high up as Pomminville all the way down to John Scott. Many people gave Regier a ton of credit for his trades resulting in bring a 1st round pick for Gaustad, Roy for Ott (although I'm still not convinced that Ott is the answer to our needs but he definitely cares about this team) and Cody Hodgson for Kassian. I did too at the time, but let's really think about what really makes a GREAT hockey team. Most if not all of the teams that have won cups in the past 10 years have had at least 1 if not 2 Elite/at least great centers. Hodgson is not elite, yes that move he pulled off a couple games ago to score going in alone was impressive if not Malkin-esque but still he is not, at least at this point elite.
Let's go back:
2012: LA Kings-Anze Kopitar, elite awesome center and strong leader, not to mention their captain is Dustin Brown, a CONSISTENT scorer in the league
2011:Boston Bruins-Patrice Bergeron, David Krecji-Neither elite but strong good centers on both sides of the puck
2010: Chicago Blackhawks- Jonathan Toews-Elite superstar, young, center. Not to mention great captain and leader
2009: Penguins- Crosby-love him or hate him he is as elite as they come, 2nd-Malkin-Elite, and oh also Jordan Staal-not yet elite but has proven greatness
2008:Red Wings-Zetterberg/Datsyuk-there's no argument whatsoever about the strength and ability of these guys

Point being Darcy has yet to really bring us a strong amazing center. Now his efforts may have been wasted because of Lindy Ruff's lack of ability to train young centers...considering how little Grigorenko has proven himself and now Rolston's idea of development is starting Grigs alongside Drew Stafford and John Scott.

The Sabres' eagerness to become tougher has only led them to become one of the most penalized teams in the league and when your team is 19th(as of 3-12-13) in the league in penalty kill this is obviously no good.

These points may seem redundant but one can also point to the number of egregious over payments Regier has made for sub par players or players who have not yet reached their full potential. A case can be made for Stafford, Ehrhoff, LEINO, Connolly, Roy, Myers, Regher, and these are all mostly recent moves.
At this point I would trade anyone on this roster, YES even Miller, Vanek, or Pomminville. If the price is right. Enroth does not belong in the NHL please send him back to the Swedish league or somewhere not here.

Bright spots: Flynn looks great, that whole young line with Porter, Flynn, and Foligno look great together. Hopefully that will let Foligno get back to the scoring ways we saw near the end of last season. Miller has been playing great, and Ott+Hodgson seem to be nice additions to the team.

If I were playing Be A GM/Coach mode for this team: Sell Pommer to the highest bidder, give Vanek the "C" give an "A" to Ott, remove the "A" from Stafford's jersey and give it to Myers maybe? Some kind of boost for the guy so he will return to form. Honestly Ennis probably deserves it more or Gerbe for his effort. Also I would at least make an attempt to get: Mike Ribiero, Jarome Iginla, or Bobby Ryan. Any of those guys would be a great addition

PROBLEMS: Hecht should not wear a Sabres' sweater ever again and if you are going to step up for a teammate it helps to show your strength in the fight (WEBER), credit given for stepping up for Ennis, and Simmonds is a monster, but you have to give it more than that.
Leino and Leopold say they are ready to go against the Rangers tonight...are they?rn 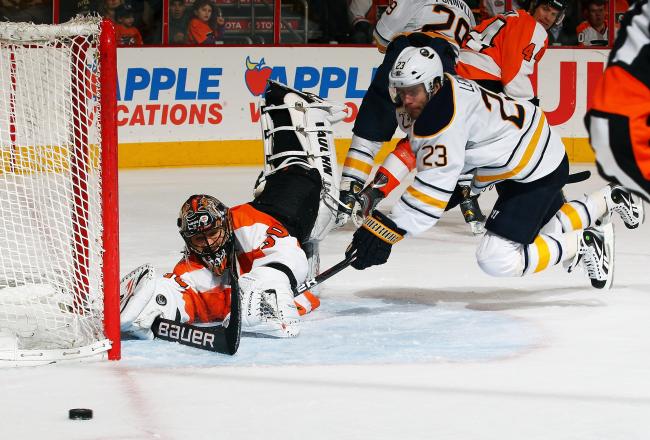