Tonight's game is the first game that Jay Feaster will get the play against his former team the Tampa Lightning. It was in 2008 that Jay Feaster decided to resign from his position as GM of the Lightning and he will be looking for the win. As much as I wish I could say this team would be motivated by their loss to the lightning in the 2003-4 cup final (That's right we had won it) of those players the only ones that still remain are Iginla and Kiprusoff.

Motivation can be a tough thing to come by sometimes but I believe the Flames will find it tonight. The team seems to have finally started to find a bit of confidence despite the loss in Nashville, I expect to see them come out flying. The Flames were out shot 45 - 36 by the Preds and I would imagine that Sutter had some strong words about that. Expect to see a much tighter game with fewer chances for the opposition. The Lightning are missing a key piece in their roster as Martin St. Louis is out after taking a puck to the face in practice, this can only bode well for the Flames. If we are to continue to have what could be a turn around month then the flames need to seize this opportunity.

Most of us western hockey fan don't get to follow the east as closely so here is whats going on with the Lightning. Flames fan think we have it bad, but the Lightning are struggling even worse then we are with a 12-16-2 record this year. Steven Stamkos is on a pretty good tear with 18 goals and 33 points this season. The lightning are receiving mediocre goal tending from Roloson who has a sub .900 average of .882 and a 3.67 GAA and as a result Mathieu Garon has played more games. Of note Mattias Ohlund is also injured.


LINES! Will update after the skate bourque could sit with the flu again

I am sure We are all wondering when Irving gets his first start, and now its starting to look like the next game against the Florida Panthers. The next game is the second part of a back to back for the Flames, and despite his enthusiasm to help his team Kipper should be rested as he over works himself. I am sure the anticipation is mounting
for a lot of you, as many of us thing that Irving might be our future goalie and this is en excellent opportunity for him to prove it.

What are your thoughts? 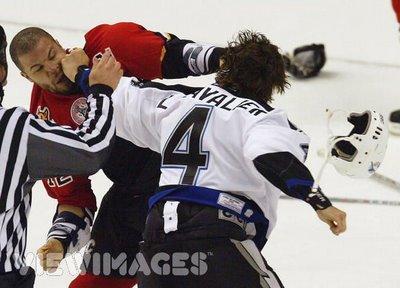 December 16, 2011 1:52 AM ET | Delete
I am not sure Kevin. I think he mentioned having lots of family stuff going on. I hope all is well. I'm sure he will be back at it soon, but I plan on trying to keep up and blog as often as I can.
Kevin R

December 16, 2011 2:01 AM ET | Delete
Awesome.Next few games are going to be tough, expect to slide under .500. January schedule is hell
vowswithin

December 16, 2011 2:08 AM ET | Delete
Yeah, it's definately going to be tough but for now I just take it 1 game at a time. Hopefully the flames decide to take a page from last years holiday frenzy...Well post holiday that is.Fingers crossed
geta02it

December 16, 2011 1:16 PM ET | Delete
AMO's a douche... just ignore him. If we can stay with in two games of 8th place, we'll be ok... we just can't afford the win/loss scenario we saw at the beginning of the year. Still think we are in tough for a playoff spot but who knows, maybe Feaster can ask Santa for a playoff gift...
Bsn1pes

December 17, 2011 3:40 AM ET | Delete
I actually like your blogs, you actually watch the games, and are able to talk about lines / combinations etc. You also form opinions about things which is great. I can't tell you how many better blogs I've read that say we lost and the flames should be better without actually talking about the game, or anything. Keep up the awesome work dude!