Thanks Canada for kicking me in the Nuts! + Flames vs Bruins 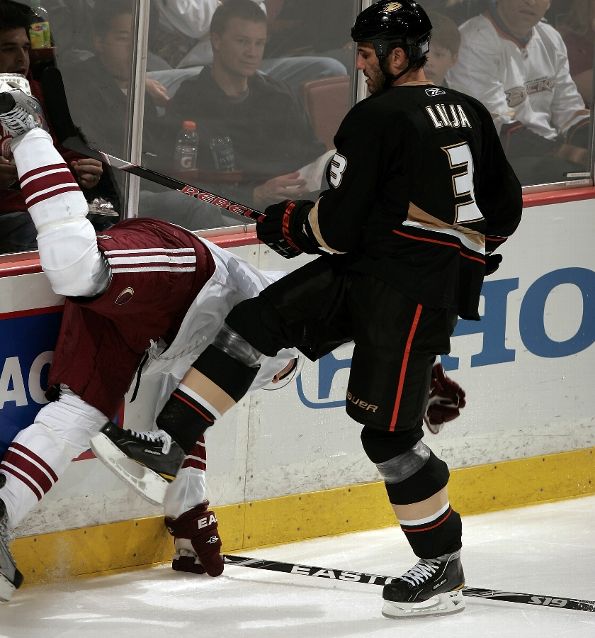 Agony! Ahh that feeling of nostalgia. It was just last year that Canada found itself in a very similar place. And yes now it is official, Canada has lost yet another WJC (anyone who isn't first is a loser so lets not talk about the bronze game). I am now starting to know how American's feel when beloved football teams bites the dust and are gone for yet another year. I consider myself a patriotic hockey nut that LOVES his country, and when team Canada loses I feel like my heart was kicked square in the nuts. Sure we won the Olympic hockey game, but we should! Here in Canada we consider ourselves the best hockey nation in the world. We produce AAA Grade players, and in fact Canadian players account for 53.3% of the players in the NHL (USA 23.9, Russia 3.3). So how is it that we managed to lose once again? I don't really know if I can answer this other then to say Russia came prepared and they had more will. Sure there are lots of things you can blame like lucky bounces, injured players, injured goalies, players in the NHL not released for the tournament, but we lost.

We will see you again next time, and I sure hope we learned from the last three years. Congratulations Russia I can't think of a better way for you to have honored the many hockey players that passed away in the Lokomotiv accident. Just know that my pride (and junk) will never be the same.

The Shannaban Hammer of Doom!

Shanny got back to it today assessing suspensions to Carcillo and Bourque. What the hell is going on in the head of Rene Bourque these days? He is on his second suspension just 15 days after the first one. In case you haven't read by now, Bourque got 5 games for his elbow on Backstorm in the Capitals Game the other night. My Feelings? Bourque has so much potential, but instead he decides to play a few games then float around. He plays good then he looses the game in Ottawa with his penalty and sits himself for a 2 game and then a 5 game suspension both within half a month! I am starting to feel depressed! We are now locked in for a few years with this guy. If he doesn't do something soon to turn things around, we won't get any trade value for him if we "blow it up" and he will loose the fans.

Rene get your %^&* together!
Here is the link to the hit, what are your thoughts?
http://www.youtube.com/watch?v=I38dKQlTP1E

Quick little update Thomas, Karlsson, Phaneuf, Alfredsson, Spezza, and Michalek have been named the starters to the 2012 All Star game. Goes to show how awesome Canadian markets can be! Now if we could just vote in all Canadian players.
Who should be in this year?

Once again thanks team Canada and thanks Calgary.

The Calgary Flames are all set to square off Thursday night against the Boston Bruins. The Bruins are coming into this game on the tail end of back to back games, while Calgary has rested a night. There isn't much to say here. Boston has been rolling along very nicely and will more then likely squash the Flames like the annoying mosquito they are. With the four game loosing streak, Bourques suspension and injuries to Alex Tanguay, Mark Giordano, David Moss, Derek Smith, Henrik Karlsson, Brett Carson and Matt Stajan things are looking down.

That being said, Carson has been sent to the AHL again for a conditioning assignment and Nemisz well because he can't run with the big boys. I don't know if its true but I am hearing that Raitis Ivanans could return in his place. Good good please no! If you are going to something, bring up another young guy for an audition! The last time these two teams matched up the Flames lost to the Bruins 3-1 at the tail end of the big run that almost took us back into the playoffs. This year we don't have the motivation, the skill or the bodies to beat Boston. If Calgary some how pulls off a win it will surely be a miracle.

Just in fresh from the flames website Irving will play tonight! This is great, a game we might loose anyways you might as well give the backup a chance. Who knows maybe he plays lights out and squeak out a win!


We are still waiting on magic #500 from Iginla and who knows if it happens tomorrow or not. Being one of the most respected players in the league you have to imagine that no matter where he scores the goal fans of hockey will be excited. Will Iginla finally do it tonight?

January 5, 2012 3:22 PM ET | Delete
I sure as hell hope something gets this guy thinking with his head and playing better. If not what a waste!
vowswithin

January 5, 2012 3:30 PM ET | Delete
What would your asking price for Bourque be Kevin? Could he be worth late first round pick to a deep team? Or is he no better then a 2nd. Turris brought Rundblad and a 2nd and my guess is that although older Bourque is the type of player Turris will develop into.
B.J.Harvey

January 5, 2012 3:41 PM ET | Delete
I honestly thought that this could be a big year for bourque at the beginning... now he is looking like a salary dump
Kevin R

January 5, 2012 3:50 PM ET | Delete
suggested on Flame Nation of getting Getzlaff. What would it take? Bartsche. JBO
Kevin R

January 5, 2012 4:01 PM ET | Delete
Jeeze that is tough, you know Toronto will be going hard at that one. If they would do that I am in! But I bet that want that plus a first. But if you could get yourself a Getzlaf you have a legit Iggy center! Wouldn't that be glorious! And at 26 he is a great age and mature but not long in the tooth.
Kevin R

January 5, 2012 11:07 PM ET | Delete
I think Jay Bow should start paying the Flames for Public skating cause that's all he does -5 tonight and his partner was -7 pretty brutal.
Xposure

January 6, 2012 12:08 AM ET | Delete
The Flames did indeed play pretty dismal tonight, and are on a losing streak where they have looked like below average hockey club. I for one am unsure how they can improve themselves. Everyone is talking trades, but in reality we have a few NMC that would make tradesdifficult. Disregarding those NMC who would you be willing to move? It's hard to figure out how to make this team better when it seems nobody responds to anything.
Kevin R

January 6, 2012 1:06 AM ET | Delete
Hey X. Not too worried about the NMCs, who in their right mind would block a trade that could put him on a playoff bound team
all mighty oil

January 6, 2012 10:14 AM ET | Delete
Wow I am I glad I missed that one. I wouldn't be surprised if they fired everyone and iced a hockey stick tied to the net. Wait, T.J. Brodie was awesome, I forgot about him. I caught the highlights on sports center and that was enough for me. Kevin's right, there probably isn't anyone that would want to stay on this sinking ship NMC or not. Yup AMO pretty sad state of affairs
vowswithin

January 6, 2012 10:17 AM ET | Delete
And look at the rumors flying after the game! Oh what to do, fire a coach trade 7-8 players. Wait for the draft and next years season? Were getting there now. This seemed like the straw.. I mean granite slab that broke the camels back.
all mighty oil

January 6, 2012 1:37 PM ET | Delete
can you just do a blog with pictures of the dog (the four legged one not the flames)
vowswithin

January 6, 2012 3:01 PM ET | Delete
Oh come on, 1) None of the first 3 pictures are Calgary players, 2) Joker pictures are always funny... no matter what 3) I can't wait for the next picture of the dog for you (insert evil eyes here). Yeah I will do a dog blogIn an unrelated side not, I left the dog out of his cage while I was at work and he ate half a chocolate orange. He was shitting his ass off all night. Poor bastard.
Kevin R

January 6, 2012 3:54 PM ET | Delete
Hey Vows, wheres our blogger in our darkest hours. Quite a blog that could be put out
vowswithin