Nashville Predators GM David Poile is sending the message loud and clear to pending free agents Shea Weber and Ryan Suter. He is serious about winning a Cup and his moves in the last month are proving just that.

David Poile is probably in the toughest position of any GM in the league right now. He is damned if he does and damned if he doesn’t. Poile has the job of convincing his two star defensemen that the Predators as a franchise are committed long term to putting together a Stanley Cup caliber hockey team. However Poile has the short term job of going all out in order to send a strong message to the aforementioned defensemen with no assurances from them moving forward.

Last season Poile made a bold move of acquiring Ottawa forward Mike Fisher. It was a great move for the franchise on and off the ice given who Fisher’s wife is. It came at the cost of a 2011 1st round pick as well as a 3rd in 2012. Poile knew that his forward group needed an upgrade and he strongly went after that need.

Fast forward to this season; both Weber and Suter are still reluctant to sign long term extensions to this point. Weber is an RFA, however the team already has used their one time only team initiated arbitration process. It looks like Weber will probably end up going the player initiated arbitration route. This will assure him top money but with a short term deal that will get him to UFA status earlier. Suter is a straight up UFA and can walk if he so chooses. Both players have stated they want assurances that Nashville will indeed formulate quality teams moving forward. David Poile has taken that into serious consideration. No team was more active with impact moves than Poile at the trade deadline. Also no GM was as willing to part with high end draft picks for rentals as well.

Poile started early by strengthening an already great defense corp by adding solid physical Hal Gill. Gill will definitely not hurt a team, especially playing in the bottom 6. He plays a simple game and is a monster on the PK. The cost to acquire Gill was young Blake Geoffrion, Robert Slaney and a 2012 2nd round pick. A pretty decent price tag to upgrade a defense that is already amongst the league’s best.

Knowing that the defense was as good as it gets Poile then shifted his focus back to the forwards by acquiring Andrei Kostitsyn from the Montreal Canadiens for a 2013 2nd and 5th round pick. Kostitsyn provides some more offensive skill up front that the Predators are always in need of. Poile then got extremely aggressive and acquired Paul Gaustad of the Buffalo Sabres for a 2012 1st round pick. Some may cry overpayment, I may be one of those people, however Poile knew that he had to send the message he was serious. I respect him for having the guts to make a move like that for a piece he thought could help come playoff time. Poile knows that Gaustad is strictly a rental yet still felt the need to relinquish the 1st round pick to do so.

Last and certainly not least is a development that has come to light in the last week. Alex Radulov is serious about coming back from the KHL to join the Predators. The Predators have been lacking exactly the kind of player Radulov is since, well, since Radulov left them a few years back. With the potential addition of Radulov the Predators have one of the finest looking playoff style rosters in the entire NHL.

Poile has put his eggs all in one basket in the past few months. He no doubt has made many of these moves to send a direct loud message to Weber and Suter. The Predators do not have a pick in any of the first 3 rounds this upcoming draft in 2012 and do not have a 2nd round pick in 2013. Poile has recently shown that money is not the issue by giving Pekka Rinne a 7 year 49M deal, the largest in team history.

Weber and Suter may not want to make Nashville their long term home however it will not be Poile’s fault for not trying. He has done all he can up to this point to improve the club for a Cup run this year, as well as proving that Nashville genuinely means well moving forward. Luckily for Predator fans Poile seems to be one of the best at restocking their defense corp year after year. If Suter and Weber do not want to stay for the long haul Poile will most certainly find a way moving forward, he is resourceful. The ball is now in Weber and Suter’s court, Poile has done all he can given the situation he is in. If both defensemen truly want to be Predators long term, they will have that option, the money is there.

I do not believe any GM could have done better in this impossible situation. If nothing else the Predators are one of the favorites for the 2012 Stanley Cup Playoffs.


Thanks for reading, feel free to share your opinions, both positive and negative.

(FYI Just remember that if you type too much in one entry it will show up blank, you have to break it up into multiple posts) 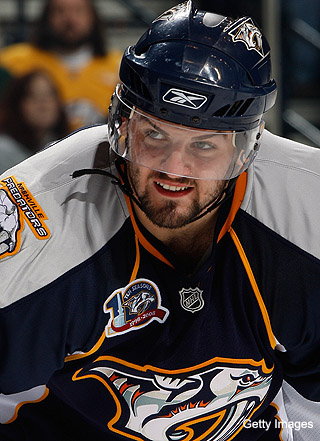 March 19, 2012 1:10 PM ET | Delete
The real question is, if they win it all this year, does everyone stick around? Not a knock on Nashville at all, I just always wonder where players' heads go after they've already got a ring... perhaps towards a handful of teams they've "always wanted to play for," somewhere closer to home, or just a change of scenery. It will be interesting to see how the Preds handle this whole thing. Playoffs have to be the focus for now, though.
12pack

March 20, 2012 2:05 AM ET | Delete
I hope things work out for Nashville, and they somehow manage to sign up both players.As for this years playoffs, with Rinne in goal anything can happen.
RabidEmu319

March 20, 2012 7:37 PM ET | Delete
A very good read, and lots of solid points. I agree, with Radulov coming back (assuming he can adjust to Nashville's system fast enough) they are definitely a scary looking team. Definitely a team to beat...I miss Goose
TerryB