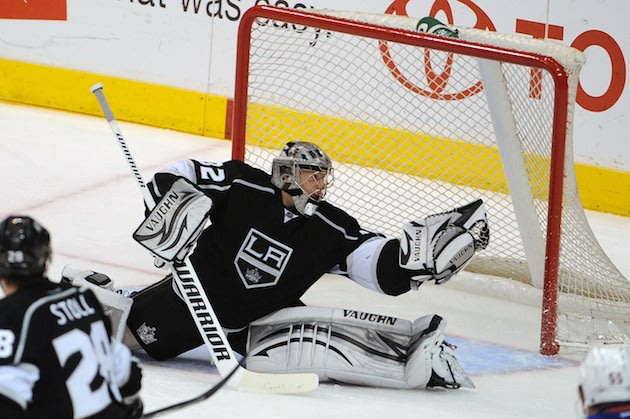 For much of the season the race for the Vezina trophy was a one man contest. Henrik Lundqvist of the New York Rangers was not only being mentioned for the Vezina, but for the Hart Trophy as well. If he indeed wins the Vezina I do not believe too many people, myself included, are going to question that result. He would be a deserving winner obviously.

However, should Jonathan Quick be elevated into the discussion with King Henrik? The answer is definitely yes.

Jonathan Quick has been the Kings MVP and it is not even close. Without Quick the Kings would be looking at the playoffs from their living rooms in round 1. With him they are now currently leading the Pacific Division by 2 points over the Coyotes.

Quick has been on the wrong end of quite a few decisions this season as his team’s offensive output has been about as big as an Olsen Twin meal.

In 15 games this season Quick has allowed 2 goals or less, and has taken the loss compared to 8 times for Lundqvist.

9 times he has allowed 1 goal, and taken a loss. Talk about not having any room for error. Lundqvist in the same scenario has take a loss 3 times.

He is now the league leader in shutouts with 10, three of those shutouts have come in 1-0 victories. Lundqvist has one 1-0 shutout to his name this season.

He is in the top 5 in the four major goalie categories (as is Lundqvist):

You are really splitting hairs when comparing both of their stat lines.

I think the difference is that Quick does not have as much wiggle room for his team to be successful as evidence by how many losses he has taken while giving up 2 goals or less.

The New York Rangers are 11th in goal scoring with 2.71 goals/game

The Los Angeles Kings are 29th in goal scoring with 2.26 goals/game.

Both teams have competent backup goalies and even their numbers are extremely similar:

Notice the records though. Bernier has more losses than Biron in 6 less games. The Rangers are able to have success with their backup goaltender in, the Kings are not, even though they have similar stats. This tells me that Quick has had to have a Superman kind of effort every single night for the Kings to win games, and for the most part he has. This has led to him playing in close to 70 games this season, only Hiller, Rinne, and Kiprusoff are on pace to finish with more games played.

Given how close all the stats are for both Quick and Lundqvist I would personally lean towards Quick getting the award. Both goaltenders are worthy but I think that Quick has a lot less room for error yet has still stayed strong and pushed his team through to what looks like a divisional title. I give credit to Quick knowing before he steps on the ice that if he gives up more than 2 goals, his team is most likely going to lose (13 times they lost anyways). That must weigh heavy on a goalie night in and night out. I am extremely impressed by his ability to stay the course and still produce in that kind of pressure cooker situation.

You can’t go wrong with either guy, but I think Quick deserves to be mentioned on level ground with Lundqvist this season, not the guy trying to catch the favorite for the award.


Thanks for reading, feel free to share your opinions, both positive and negative.

(FYI Just remember that if you type too much in one entry it will show up blank, you have to break it up into multiple posts) 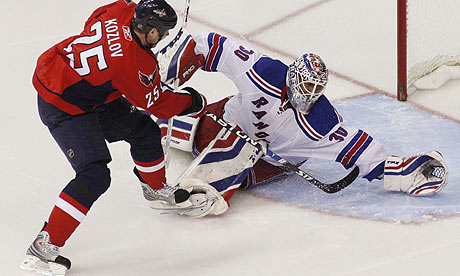