Posted 12:11 PM ET | Comments 11
The NHL and the Board of Governors has approved a plan that will dramatically change the landscape of the NHL regular season and playoffs. With any new plan there are going to be pros and cons. Unfortunately for me I feel that the cons dominate the pros in the new setup.

Here is some of the fallout from the changes:

Creating divisional rivalries: The schedule now has divisional play at its core. In the regular season you will play your divisional rivals more than any other teams (that is the one thing that has not changed). The key difference is now the first two rounds of the playoffs are now completely within the division and take the inter-divisional approach to a whole new (or older) level.

As somebody who is a Penguins fan I will be forced into caring about only 7 other teams because in reality those are the only 7 teams that matter when trying to get to the semi-finals of the league, all 22 other teams be damned. Half of one’s schedule will be within the division (6 games vs 7 teams = 42 games). Not exactly something that promotes the league holistically.

For those that are too young to remember if you were stuck in the Islanders or Oilers division in the 80’s you could kiss going deep into the playoffs goodbye. In the future I think you find that a lot of the “Stanley Cup Finals” could take place in round 2 between two prohibitive favorites, much too early. To me the system in place was not broken and did not need a dramatic facelift. You don’t need “divisional rivalries” to heat up an NHL playoff series. The series just has to happen. Look at Chicago/Vancouver, Buffalo/Carolina, Pittsburgh/Washington, Edmonton/Dallas, Detroit/Colorado etc…

Anybody who follows NFL football knows what a joke the NFC West was last season as they not only had a playoff representative with a below .500 record (Seahawks) but they actually hosted a playoff game!

This kind of dynamic is alive and well with the new format the NHL is applying. There will be times now where a team can have 7 or 8 more points than another team but they will miss the playoffs.

You are now at the mercy on how great or bad your “conference” will be. That should not be a predominate factor in your path to the Cup, it now potentially is a big factor.

Take for example the 2009-2010 standings. Washington, New Jersey, and Pittsburgh finished in that order for total points in the Eastern Conference. Under the new setup New Jersey is “rewarded” by playing Pittsburgh in the first round? I’m sorry but that is unacceptable.

In the old setup you might have a team in Western Conference that is the 8th seed with fewer points than the 9th place team in the Eastern Conference. It is easier to swallow if the 16th or 17th best team in the league misses out on the playoffs. In the new setup you are going to have teams that are really in that 8th-12th best range not going to the playoffs on any given year because of the specific “conference” they are in. To me that is not the direction the league should head in.

This may have been the #1 factor in how the new alignment was set up. It was no secret how badly Detroit wanted to move East. Bettman had made a quasi promise to Illitch back in the 90’s about getting the Red Wings back East “when the time was right”. Well Bettman didn’t get them to the “Eastern Conference” instead he uprooted the whole system which seems to have benefited no team more than Detroit. In my opinion Detroit used every bit of that leverage on Bettman for what he told them in the 90’s.

The thing that eats at me the most is how can you explain not moving Nashville or Columbus to the SE division and Winnipeg out West? That is honestly all it would have taken and there would not have to be dramatic changes to the format. The NHL should have adopted the mindset of KISS. Keep it simple stupid. Instead the whole structure of a league is changed and not only that but one of the most successful postseasons in any sport has gotten a dramatic facelift. Only the NHL would fix what was certainly not broken.

As a die hard hockey fan it really doesn’t matter what I think because the NHL has never cared about what I think. They just need artificially stoked rivalries to cater to the casual fan. They know I’ll be watching anyways. 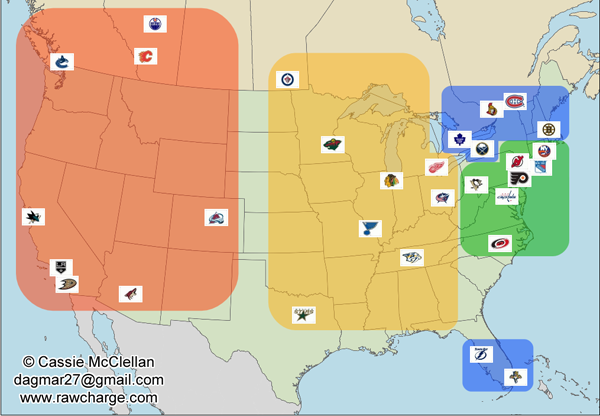 December 6, 2011 2:28 PM ET | Delete
Suprised to see so many people howling negatively about this. At least hockey fans will get to see EVERY team at home. This will strengthen the great rivalries that exist. Seems to be a question of whether the semi final teams will be re-seeded...As a Chicago Blackhawks fan I'm glad we keep Detroit with us and look forward to establishing a new rivalry with the Minnesota Wild, and the team they suceeded in the Twin Cities, the Dallas Stars..
Gunner Staal

December 6, 2011 3:06 PM ET | Delete
I don't think this is all about changing the playoffs. It's just eliminating two divisions and trying to group teams together geographically and will create even more rivalries.
Gunner Staal

December 6, 2011 3:17 PM ET | Delete
This drastically changes the playoffs. For the first two rounds going into any given season now you have the potential to play 7 different teams, down from 14.
Shorty's ritalin

December 6, 2011 3:21 PM ET | Delete
As a Canuck fan I grieve for the damage this does to the Van/Chicago rivalry. Only playing twice a year and both having to get to the third round to meet up in playoffs.
John Jaeckel

December 6, 2011 3:51 PM ET | Delete
Nice blog and I see your point about the playoffs, Gunner. But I still like the move as you'll see in the next HotStove.
Gardien de but 35

December 6, 2011 6:34 PM ET | Delete
Gunner as we've discussed before I agree with you on the playoff format, it is a change for the worse and there's no two ways to look at it. BTW on that colorful map you have at the bottom, is there any team more isolated in this league than Colorado?
Deadstar

December 6, 2011 8:08 PM ET | Delete
Good write up. As a statistics guy, you're more likely to see the best 16 teams in the league in the playoffs in the old format than in the new. Familiarity breeds contempt, but it also breeds monotony. I got tired of seeing the same team 8 times a year like we did coming out of the lockout. Now you're guaranteed to see the same team minimum 10 times a year. I just feel like there were other ways to fix the travel issues.
Ogilthorpe2

December 7, 2011 5:53 PM ET | Delete
You say they shouldn't have fixed what wasn't broken...couldn't agree more. Which is why I'm glad to see they are moving back to a playoff system that more closely resembles a system that should never have been changed to the format we have right now. Kudos to the league for righting a previous wrong and bringing back the divisional playoffs.
scottak