Posted 12:37 AM ET | Comments 2
Over the Next 30 days I will be Previewing each of the National Hockey League Clubs heading into the 2011-12 season starting from the Anaheim Ducks. Day 10 of the series belongs to the official AarifDeenReport Detroit Red Wings Preview.

2011 Review:
It seems like every season the Red Wings ice the same squad. Teams all around the NHL can get better and worst. Teams around the NHL can sign the big names, make the big trades, and hire the big names. But one thing never changes. The Red Wings are always a contender. Lead by Lidstrom, Datsyuk, and Zetterberg, Hockeytown always has something to look forward to come April. While most teams enjoy the off-season and all the action that comes with it, Red Wings fans see it as a stalling point before the season starts again. Minus the rare “Hossa-like” signings, Wings management usually stay away from the big names and just add small parts to their fantastic core group.

At the start of the 2010-11 season, while the Canucks went out and made many big moves, the Sharks adding a Stanley Cup goaltender, and the Kings shoring up their defense adding veteran Willie Mitchell, the Red Wings did almost absolutely nothing. But they stayed atop the Western Conference contenders with the other big-name teams.

Similar to almost every other year, the Red Wings got off to a hot-start. Through the first two months of the season they had already won 17 games with just 6 losses, two of them in overtime. Like always, they were one of the leaders in the standings. I mean why wouldn’t they be? While every team ices 20 skaters each night, the Red Wings ice 19 skaters and Pavel Dastyuk. The man single handedly can blow the roof-top off the Joe Louis Arena. With hands like that “The Magician” has been one of, if not the best Red Wings players in recent history. While he’s at a ripe age of 33, Pavel seems to get better every year with no signs of slowing down.

Through those first 23 games, the 171st overall pick in 1998 had already compiled 8 goals and 28 points. Injuries soon slowed his season down a notch, but for the fifth time in six seasons since the dreaded lockout, Dastyuk finished with a point-per-game average and will look to build on it this year.

With Dastyuk going down to injury, as well as many other key components of their team, the Wings started to lose a lot more. The Wings won just 22 of their next 44 games before finishing the last 15 games of the year with an 8-5-2 record. Had it not been for their magnificent start, the Wings probably would’ve not been atop the division. However, with 104 points on the year, they beat out Nashville’s 99 points and were back as the Central division champs.

After a sweep of the NHL-owned Phoenix Coyotes, the Wings saw themselves involved in a rematch of last seasons WCSF against the San Jose Sharks for a trip to the final four. Niemi and the Sharks won the first 3 games of the series, leaving the Wings in a tough position for the second straight season. However once again, Babcock’s team refused to be swept out of the playoffs and won game 4 in front of their home crowd.

Unlike the 2010 series between these two powerhouse teams, Detroit entered game 5 with confidence and were ready to extend the series another game. They entered the 3rd period down a goal and just 54 seconds in Logan Couture put another one in to shock the Red Wings who had just 19 minutes to make a comeback from down 3-1.

Lets just say that really didn’t take long. Less then 5 minutes later, it was a 3-3 tie game and the Wings were carrying all the momentum in front of a stunned crowd of 17,562 at the HP Pavilion. With just over six minutes remaining, Holmstrom finished off the comeback for Detroit who were heading back home for game 6, where they once again faced adversity.

The Sharks and Wings played a tight defensive game heading into the third period of game 6. The scoreless teams were both looking for the first strike. Fortunately for McLellan’s team, they were first on the board after Logan Couture once again scored for the Sharks. Unfortunately for the Sharks, Detroit scored 3 goals in the last 10 minutes and sent the series back to San Jose for a historic game 7.

With all the hype heading into this game, everything seemed to be on the Red Wings side. History, momentum, and the media. But it was San Jose who would finally finish off the series. Losing game 7 by a 3-1 score, the Red Wings once again went out in the second round against the Sharks, and entered the off-season once again with a big question mark regarding Niklas Lidstrom’s career. 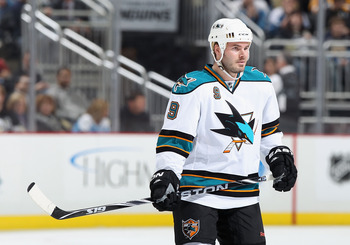 Ian White: While all eyes were on Lidstrom, it was 37 year-old Brian Rafalski who shocked the Red Wings and the NHL by announcing his retirement. Who was signed to replace him? Ian White. Ever since Burke over-valued the young defenseman and used him as the main player to acquire Dion Phaneuf, Ian has seen himself play for three other teams in 18 months. The last being San Jose. The 27 year-old is now signed in Detroit for 2 seasons and will take-on a top 4 role with high expectations on the kid to pass his career-high 26 points this year. A great addition to a very stable defensive unit in Hockeytown.

Mike Commodore: Looking to crack the top 6 in Detroit, Commodore is seen by fans as the veteran replacement to last years Ruslan Salei. With Lidstrom, Stuart, Kronwall, and White rounding out the top 4. Commodore will likely see himself paired with Ericsson. This is all considering Smith or Kindl don’t push themselves into the roster after training camp.

Ty Conklin: After spending two years in St. Louis, Ty Conklin is back as the Red Wings back-up. Only this time he’ll be sharing duties with Howard instead of the recently retired Chris Osgood. Ty posted great numbers in Detroit and used that as a big factor in where he would sign this year. For just 700k Conklin will handle a good load of games for Detroit and will post respectable numbers back in Hockeytown.

The Others: Looking for a fresh start, Chris Connor joined the Wings on a 1-year deal out of Pittsburgh. Similarly, Garnet Exelby signed in Detroit hoping to make an impact in Grand Rapids before getting another legitimate shot at the big leagues.

Full-Team Look-in:
Well what else can we say about the Red Wings. Not many changes were made, yet again. Detroit will enter the season with the exact same offensive team, minus the failure that was Mike Modano. With Zetterberg and Datyuk in their early 30’s and in the midst of their prime, Holmstrom and Todd “the cheap shot king” are well into their careers and nearing the end of the road. Cleary and Franzen also are over 30. This Red Wings core consists of veterans but this old guys sure can play.

Abdelkader, Filppula, Hudler, and Helm will continue to be the youngsters on the team at ages between 24 and 27. Expect the Red Wings to score near the top of the league once again. Last season the Wings were 2nd in the NHL with 261 goals. This was done with Dastyuk, Franzen, Modano and others all missing significant time with injuries. With less injuries the Wings will easily build on that number.

Once again Niklas Lidstrom has won the Norris Trophy. Once again Lidstrom will be back on a 1 year deal as team captain. This will probably be Lidstroms last year manning the blue line, but the 41 year old has yet to miss a step in his game. For the first time in his 19 year illustrious career, Lidstrom posted a minus rating, but his offensive numbers remained near the top of the league with 62 points.

Ian White, who has played limited roles on all his previous teams will play a bigger role in Hockeytown. The defenseman finally came into his own during the playoffs with the Sharks. With 26 points his previous high, Ian will easily top that number and look upwards of 30 points this season with all the powerplay time he is expected to get. 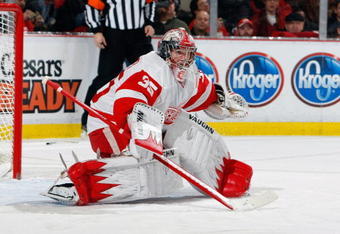 Back in goal for the third straight season is Jimmy Howard. The long-time Red Wing has won 37 games each of the last two seasons ultimately unseating Chris Osgood as the Red Wings starting goaltender. This year however he won’t need to play as much games as the last two years with Ty Conklin as his back-up. Howard has played 63 games each of the last two seasons. Ty Conklin however has played an average of 31 games a season since 2008 while posting good numbers.

There is really nothing much changed about this Red Wings team. Once again they will ice a very similar roster in front of the hockey crazed Joe Louis Arena fans. The Kings went out and acquired Richards and Gagne in separate deals. The Blackhawks added numerous depth pieces to their roster lead by Andrew Brunette. The Canucks added Sturm and the Sharks added Havlat and Burns. However, with all those improvements, Detroit will remain one of the Western Conference powerhouses and be contenders once again.

Deen’s Prediction:
While the Red Wings will continue to be one of the best in the Western Conference, they will have a season similar to 2009-10. Rattled with Injuries most of the way through, Detroit will lose the division to the young St. Louis Blues, but will play them in the first round after settling for the 6th seed after a strong end to their season. Being this years Tampa Bay Lightning surprise team of the year, the Blues will upset the Red Wings eliminating them in the first round in game 7. The Wings will suffer their earliest playoff exit since 2006. Expect Pavel Dastyuk to once again score at a point-per-game pace.

Deen’s Daily Tidbits:
Announcement has come out that Peter Mueller has fully recovered from his concussion and will be ready to start the season in Denver. Lets all pray for Perron and Crosby to pull through as well!

How can Dean Lombardi make a big deal about Colin Fraser’s injury and then go out and sign Ethan Moreau?

Is it just me or is Bryzgalov gonna have an all-star year in front of a stacked defense in Philadelphia that’s ten times better than what he had in Glendale.

On topic with tonight’s blog, I think Modano needs to just call it a career. His time has come.

Thomas took the Stanley Cup back to Flint, Michigan. I’ve never seen a bigger smile on a Stanley Cup Champion. 37 years young his heart is.