Posted 11:21 AM ET | Comments 5
Over the Next 30 days I will be Previewing each of the National Hockey League Clubs heading into the 2011-12 season starting from the Anaheim Ducks. Day 11 of the series belongs to the official AarifDeenReport Edmonton Oilers Preview.

2011 Review:
After selecting Taylor Hall with the first pick in the 2010 draft, It was now clear that Edmonton was turning the page into a new era of Oilers hockey. It was now time for Hall, Eberle, Paajarvi, and company to take over as the teams future stars. With these last three first round picks all locked up to entry-level deals, the Oilers and their fanbase were excited to see the future in action all at once.

For the first time in a long time, the fans had something to look forward to during the season opener. Lets just say they were given a treat on opening night. During their first game of the season, the Oilers were up 1-0 early in the third period while Magnus Paajarvi was serving his minor penalty. With one rookie in the box, another took advantage while on the penalty kill. 2008 22nd overall draft pick Jordan Eberle shook the sold-out crowd at Rexall Place and received a standing ovation for his first career goal.

With just a few seconds left in Paajarvi’s penalty, Eberle skated up the boards and while using fancy stick-work, he got past a sliding Ian White and former All-Star goaltender Kiprusoff before netting his first career National Hockey League goal on the penalty kill. The goal seen HERE http://www.youtube.com/watch?v=Hf0pR-rSMTs was voted as the NHL goal of year on TSN and was given recognition all over the league.

It was a story-book opening game for the three youngsters in Edmonton. Hemsky and Horcoff also netted their firsts of the season in the third period and Khabibulin completed the shutout against the Flames as the Oilers skated to a 4-0 win on opening night. Three nights later the Oilers took out the Panthers by a 3-2 score to start off the season with a 2-0 record. However, it was at that point that this young upcoming team snapped back into reality and began to lose games at a high pace and found themselves at the lower end of the standings all season long.

Taylor Hall was unable to post his first goal until October 28th against the Blue Jackets. It was the eighth game of the season. Through the first seven games Hall had recorded just one helper. From that night on Hall recorded 22 goals and 41 points in just 55 games before his season came to end after his first career fight with Derek Dorsett. While the young winger is not the biggest player on the ice, still at the young age of 19, the former Spitfire star has never been one to back down from a fight.

Taylor Hall took matters into his own hands against Dorsett (seen HERE http://www.youtube.com/watch?v=hqVcBEhI7OU) and was able to stand his ground before the two went down to the ice. Hall would injure his left leg after falling awkwardly on it.

Major Players Added:
With the first overall selection of the 2011 draft, the Oilers selected another forward. For the first time however, They selected a centerman. Undersized Red Deer Rebels star Ryan Nugent-Hopkins donned the Oilers jersey and was later signed to an entry-level deal. He will be expected to turn heads at camp and look for a shot at the opening night roster. 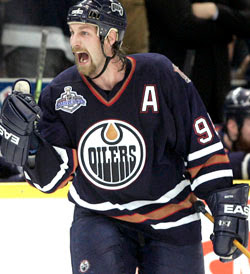 Ryan Smyth: Who would have ever thought Captain Canada would return home. That’s right! Ryan Smyth is back in Edmonton. Four years ago Ryan signed a 5 year-deal with the Avs worth $32.5 million. Through the first four years of his contract Ryan spent two seasons in Denver before being dealt to the Kings and spending two years with LA. Ryan was acquired from Los Angeles in the controversial trade that sent Colin Fraser and a 7th round pick to LA who was looking to remove his hefty contract after acquiring Mike Richards from Philly.

Andy Sutton: In a trade that saw Kurtis Foster headed to Anaheim, Sutton will join the Oilers and hope to give them the veteran presence they need on their blueline. He will be counted on to lead the teams back end along with Ryan Whitney.

Cam Barker: After being bought-out by the Wild, the Oilers took their chances on this low-risk high-reward young defenseman. Ever since Barker was traded away by the Blackhawks, he has seen his career slowly falter into a 3rd pairing role with the Wild before seeing himself as an unrestricted free agent at the age of 25. His one-year contract will serve as an audition with the Oilers. If he can get himself back on track, he’ll be in for a raise next summer.

The Others: On July 1st GM Steve Tambellini did a great job shoring up the Oilers bottom 6 forwards with three different signings. Ben Eager and Eric Belanger both received three-year deals for under $2 million per season, while Darcy Hordichuk received a one-year deal worth 825k.

Full-Team Look-in:
Once again the Oilers have taken another big step in their journey back to the top. It won’t be long before this young team is considered a powerhouse in the Western Conference. With a core built around Nugent-Hopkins, Hall, Eberle, Paajarvi, Whitney, and Omark, Edmonton fans will need to be patient at least another year in order to give the youngsters time to grow to their full potential.

Joining the young guns on offense this year will be Horcoff, Hemsky, and Smyth. The three older veterans will all play a top 6 role and will use their experience and leadership to lead the younger generation of Oilers well into their careers. Last season, Edmonton was once of four teams unable to hit 200 goals. With good seasons from the youngsters, and no injuries to the veterans, Edmonton should be able to hit 200 goals this season. Unfortunately for them, the Western Conference is too strong for this team to squeeze into the playoffs this season.

Leading the way in defense for Edmonton is Ryan Whitney. Last year his season was cut short due to injury. Ryan got off to a great start with the Oils before season-ending ankle surgery finished him off before the new year. Through 35 games, Whitney had compiled 27 points and an impressive +13 rating. This season, he, along with Sutton, Barker, Gilbert, Smid, and Peckham will look to give Dubnyk and Khabibulin an easier job in net.

It’s going to be another long season for Oilers faithful. While most bottom-dwelling teams really have nothing to look forward to, Oilers fans have plenty of optimism heading into this season. Even with another bad season in store for the Oilers, the fans want nothing more than to see the youngsters gain another year of experience and improve their offensive numbers.

Deen’s Prediction:
The Edmonton Oilers once again will place last in the NHL and receive the 1st overall draft pick. While their team has improved from last years roster, Edmonton still has too much riding on the young guys to be able to push for a successful season. Optimism will continue to arise in Edmonton though. Unless your name is Holland, General Managers usually build Championships through the draft. And with three consecutive 1st overall picks, Steve Tambellini will be laying in the finishing touches on his team before making a heavy push in a few years. Expect Ryan Whitney to score 50+ points in his first complete season with the Oilers.

Deen’s Daily Tidbits:
Sharks fans should consider themselves lucky having Couture locked up for three complete seasons at numbers below $3 million per.

August sure is the worst month for hockey fans. Is it October yet?

November 18, 2019 5:42 AM ET | Delete
Our academic pursuits, along with a range of extracurricular activities, help in honing a child's skills and ensuring that he/she grows to be a mature and responsible citizen.
top cbse school in greater noida
admission in cbse school 2020 greater noida
premium school in noida
silly19

February 14, 2020 3:16 AM ET | Delete
Welcome to the world of gaming, where life is fast paced and interesting. There is always an adventure waiting for you online.
csgo smurf acccounts
silly19

February 14, 2020 3:16 AM ET | Delete
We provide the cheapest and most reliable csgo accounts compared to anywhere on the internet. This site is run by people who have boosted their way up the ladder.
csgo prime accounts
ShaneJ

August 28, 2020 12:54 AM ET | Delete
Thanks for the amazing reviews about the sports on your blog. The people who like to watch the ice hockey matches they can grab here the excellent article about the match in detail. Thanks once again and must recommend others to avail of the opportunity.
DiegoCarlos

August 9, 2021 2:23 PM ET | Delete
I've used this website recommendation letter for dental school for a year now and the experience has good all things considered. They're reasonably priced given the quality of work they consistently deliver and you may get a discount on a good day, though it's rare. My friend recommended them and after working with them on the first order I was hooked. Dental school personal statement also provides other services, among them: letter of recommendation, cover letter, resume and personal letter. They've made my school life so easy, engaging them was the best decision I've ever made.