The Difference Between Lalime and Biron: 400K For 25 Wins 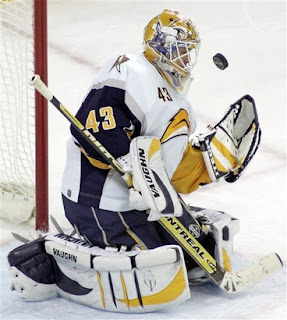 Biron Signs With Islanders, 1 YR at 1.4 M. Sabres Management Caught With Their Head In The Sand

Going into the summer, the Sabres had two glaring issues to deal with:

First, the Sabres desperately needed to acquire a few veteran defenseman. The Sabres took their first crack at fixing their defense by signing former Boston Bruin Steve Montador, a gritty stay at home defenseman. This was a good, cheap signing. It doesn't completely solve the Sabres blueline troubles (that would at the very least require getting Henrik Tallinder off the team), but it's progress in the right direction. While Regier should be applauded for bringing in a physical defenseman, he should also be criticized for failing to woo former Buffalo Sabre Jay McKee back to Buffalo. Jay McKee signed with the Pens for 800K, a genuine steal for any team looking to buff up their defensive end. Jay McKee would have been the perfect addition on the Sabres blueline; a gritty, stay at home puck blocking defenseman with outstanding leadership skills. Rumor had it McKee was in contact with Buffalo upon being cut loose from St. Louis. Apparently Darcy was unable to make a compelling offer for McKee to return. Adding both Montador and McKee to the Sabres roster would have made GREAT strides in putting together a mean defense to make Ryan Miller's life easier in net.

Second, whether Sabres management wanted to admit it or not, the Sabres needed to find a better back up goaltender for All-Star Ryan Miller. When Miller went down late last season from a "questionable" behind the net play by Scott Gomez, the Sabres season effectively went down the toilet. Buffalo had to depend on the "35 years old and still aging" Patrick Lalime. While Lalime did the best he could the first few games, he simply couldn't keep up with the workload of being a starting goalie in today's NHL. The Sabres had to acquire Mikael Tellqvist at the trade deadline to relieve Lalime, who played till a hip injury sidelined him for the remainder of the season.

When the Sabres missed the playoffs by 2 points at the end of the season, it should have been PAINFULLY evident to any Sabres fan that Lalime's age affected his play negatively, played a major role in his hip injury, and effectively cost the Sabres the playoffs. 2 Points. A single win. That is all that separated the Sabres from reaching the post season. It could be a similar fate this year. With current backup goalie Patty Lalime, if Miller goes down again (hockey gods forbid), the Sabres will not reach the playoffs.

The Sabres had a great chance to rectify this weakness by signing former Buffalo Sabre Marty Biron. The Sabres should have been actively communicating with Biron throughout free agency. He was a well loved and well respected player in Buffalo. He brought a certain amount of "swagger" to the team, and was loved by his fellow players. He was a leader in both the locker room and on the ice. Watching Biron sign to the last place Islanders for a paltry 1.4 million dollars should be seen as a HUGE missed opportunity for Buffalo. Biron is NHL starting goalie material, one which led the Flyers to the post season two years in a row. To have him back in Blue and Gold would have been a soothing presence. He would be there if the Sabres needed him, and he would likely also light a fire under Miller (a goalie with NHL starting goalie skills acting as a back up can have that effect). And to think the Sabres could have had that at the price tag of 1.4 million dollars...Wow. Lalime costs the Sabres 1M in cap space; last season he went 5 and 13. Biron would have cost the Sabres 1.4M in cap space; last season he went 29 and 19. So, that's a difference of 400K in salary and 25 Wins in a season; Which would you say is the better deal?

Leave me some comments.

July 23, 2009 8:30 AM ET | Delete
You seem to forget that Lalime was playing good hockey after Miller went down. It was the rest of the team that folded around him. To my knowledge, the Sabres have never eaten a players salary..ie cut them with time remaining on their contract. Whats scares me is that we've heard almost zero info on Lalime post surgery recovery.
Monde

July 23, 2009 9:31 AM ET | Delete
Lalime injury update - Paul Hamilton said that in the off season he under went sports Hernia and hip surgery and he will be fine for the start of the season.
KevinJames

July 23, 2009 11:47 AM ET | Delete
Lalime played good hockey after miller went down, but he couldnt keep up with being a starting goaltender. That's why the Sabres went and got Tellqvist at the deadline. Lalime won five out of 18 games last season and he's already 35. I can't see him getting any better.
habsteen26

July 23, 2009 12:56 PM ET | Delete
Biron shoulda came and backed up Price... and Lalime is way past his prime, i say sign Fernadez cheap and buy out Lalime.. and try to bring in Sergi Zubov and trade for a Jordan Staal....pens will give him up for cheap beacause they already have Crosby Malkin and Talbot.. I think the most Buffalo would have to give up for him is a medium prospect and a 2nd pick at most
Monde

July 23, 2009 1:37 PM ET | Delete
The Sabres had no intention of brining in Marty or McKee, you have to look at it from their perspective not the perspective of a fan. They have Enroth who will take over for Lalime if not at some point this year next year. Signing Marty would only delay his development. If Miller goes down I wouldn't be suprised if you see Enroth called up and get more time than Lalime.
Monde

July 23, 2009 2:19 PM ET | Delete
As far as McKee goes, if they wanted him they would have signed him instead of Montador, and can someone give me a reason other than "the Sabres desperately needed to acquire a few veteran defenseman" or they really need another physical guy. Here is a reason why they don't need another defenseman. They have a million defenseman! How about they sign a physical forward or a winger who can play on the top 2 lines, so Hecht can play on the third where he belongs.
Monde

July 23, 2009 2:21 PM ET | Delete
Assuming that Butler is in the top 6 to start the season we have Paetsch, Myers, Weber, DiPenta and Mancari can play D. At least four of those guys can play in the NHL this season.
Monde

July 23, 2009 2:22 PM ET | Delete
News flash we only have 10 forwards signed to the NHL roster Stafford when they sign him. If you have ever watched a game you need 12 forwards! On top of that after they get done paying Stafford 2.3 - 3 mill they are only gonna have about 3 Mil under the cap, Bring up Kennedy/Gerbe/insert random rookie name here and you are around 2 mill in cap space.
Monde

July 23, 2009 2:22 PM ET | Delete
This will all leave the team very thin at forward, with no healthy scratched forwards, they still need to add at least 2 forwards to the team not defenseman.Sorry its all broken up but this stupid bored will only let you post som many words.
KellyFaith

July 23, 2009 5:46 PM ET | Delete
Fail. The guy who commented on Enroth has it right. Likewise, for a team on a budget who needs to sign someone upfront still, you don't waste money buying out Lalime. Rarely do teams go back and sign guys that they moved away from.
KevinJames

July 23, 2009 10:49 PM ET | Delete
Enroth is not NHL ready yet. If management had ANY faith in him playing at the NHL level, he would have been utilized for at least a single game last season after Lalime injured his hip. Instead, management opted to waste a 4th rounder and picked up Tellqvist at the trade deadline. Enroth had a rough season last year, and hasn't made the level of progress management has hoped he would. He could still be a great goaltender, but he is still a few years away.