Huff, Puff, Blow It Down

Posted 6:51 PM ET | Comments 5
Ask any Rangers fan about the core of the team, present and future, and the answer will always begin the same way. “Callahan and Dubinsky.” Their names, always juxtaposed, are synonymous with change, hope and any other unachievable ideal promised by the POTUS. But political humor aside, these two players represent the direction this franchise has wanted to take ever since the out-of-control-spending method went out the window in 2005. The identity of this team – young, hardworking, tough, committed - is clearly reflected in the play of these two warriors. But as we once again realize that these attributes alone are not enough to bring success, we may begin to question if our foundation is made of the right stuff.

Don't get us wrong: team leaders are not necessarily, and often should not be, the most talented players. But they are not always players to build a franchise around. Ryan Callahan is the undisputed future captain of the black-and-blueshirts, at least as soon as lame duck Chris Drury surrenders the honor. Brandon Dubinsky is also an emerging leader for the Rangers. None of that should change, because every good team needs a leader. But we still must determine if these two players are "first-liners" and can be the centerpiece of a championship team, or if other players need to be brought in to carry the load.

Stanley Cup Champion is a hard title to get on your business card. We have seen one player appear in 1495 games, and another tally 731 goals and 1040 assists, without once lifting the grail. The formula for success in this league is not simple, even less so since parity put a bullet in the dynastic era. But there is one thing in common among the cup winners in the post-lockout era. They score a lot of goals. In chronological order, the championship team ranked 3rd, 9th, 3rd, 6th, and 3rd in potting pucks during the regular season. 19th place, with 2.71 goals per game, is not going to cut it, especially when you cut out eight games and are left with 2.19 G/GP over the other 62 contests. Now obviously we are banking on improvement from within, but all those cup teams also had a 30 goal scorer and most of them had a 40 goal scorer as well. When we talk about internal improvement, we talk about Callahan and Dubinsky making that necessary jump. And as three years of experience turns to four, the question shifts from “when”, to “if.”

Performance in any sport, hockey included, is wildly unpredictable. In 2007, not many fans would have predicted that Brian Boyle would have a bigger impact, and we mean positive impact of course, than the great Chris Drury. So it goes without saying, at least where angry responses don’t need to be preempted, that Callahan and Dubinsky may indeed evolve into elite forwards. However, comparative research often provides reliable grounds to make educated guesses, and in this case, they do not provide optimism. Patrick Sharp, currently 4th in the NHL in goals, hit the 30 goal mark in his third full season (50 or more GP) and would have done so the next year if not for injury. Corey Perry (3rd) and Jeff Carter (9th) both scored 29 in their third season, and exceeded 30 the following year.

Dubinsky and Callahan, both in their fourth year, haven’t sniffed 25 goals, let alone 30. Even if we would use goals per game (to avoid the effect of injuries and games not played yet), their totals for 2010-11 would be only 25 and 32 respectively. 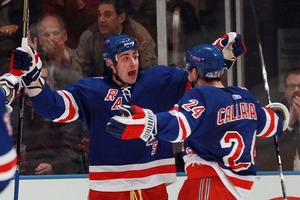 It appears that the duo is closer to resembling players like Alex Burrows, Chris Kunitz and Stephen Weiss, not bad players but not top 50 scorers either. There are exceptions to this trend, most recently the emergence of sixth year player Ryan Kesler who sits 5th in scoring despite never having surpassed 26 goals prior to this season. But analysis of the types of goals that Callahan and Dubinsky score indicates that they will not experience a dramatic bump in scoring. Neither player has a great shot, great moves, or great passing skills. They create goals with strength, forechecking and good positioning. Now some would argue that this is the right way to play hockey and to create scoring chances, and there is no disputing that. But like effort and commitment, this alone is not enough.

Even if Dubinsky and Callahan do not pan out as elite players there is still hope for the New York Rangers. Many other young and promising players are coming up through the system, including rookie center Derek Stepan who has already vastly exceeded rookie scoring totals for either of the two players that this article focuses on. But, as we mentioned previously in this space, there is a window of opportunity that is fast approaching, and the Rangers cannot wait for the likes of Kreider or Thomas to hit their prime. The free agent market is always a solution but all of us know the inherent risk in hunting for the pricey, proven scorer. So while there would be nothing wrong with Dubinsky or Callahan being career 2nd liners, especially considering that they were not first round picks, it certainly wouldn’t help the Rangers fill their need for elite scoring talent.


Please leave your comments below or at http://bit.ly/eASh9d

March 16, 2011 1:34 AM ET | Delete
Sorry about the code at the bottom. Was fooling around and it wont let me edit the post anymore.
evitageN