It was revealed that he never said those comments to Blake. That much is known. But did anybody come out like a man and say that Avery is innocent and that the writer who made up the story did a terrible thing. Did anybody say one measly word about his innocence.

One person did. Everybody else crawled into their little holes and "forgot" that anything happened. I wrote a blog about his innocence. No comments. No surprise.

The streak that led to the playoff berth last season began when Avery camoe over from the Kings.

The streak that began 10 games into this season, began when Avery returned from an injury suffered during the second game of the year. It ended when he left the ice against Dallas with a wrist injury. And when the Rangers are playing the worst hockey of the year, he returns. They play strong in a losing effort vs Ottawa and come back with two convincing wins over Carolina and Toronto. We are not out of the woods yet, far from it, but it is a start.

I am convinced. You can usually predict the outcome of a Rangers game after watching a preiod or so. Disregard the score. Just see who is winning those battles along the boards, who is first to the loose pucks and who is winning the physical battles. Do that and you will pick the winner 90% of the time. 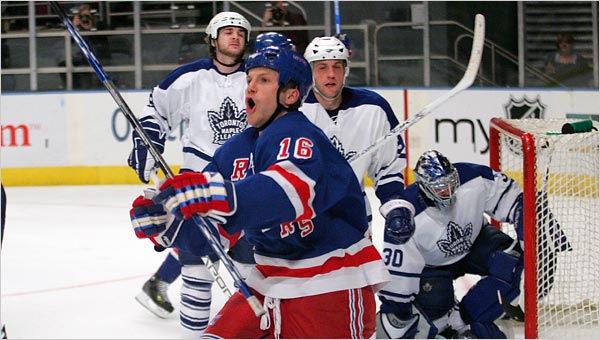 And the fact of the matter is that the Rangers, as a group, hustle a lot more when Avery is on the bench. They play a lot more physical when he is in the game. He brings more than a mouth. He brings motivation for a team who's coach can't motivate the team and who's captain has trouble motivating himself.

He has only 2 goals and 8 assists in 17 games this season. But he assists in much more than scoring.

December 30, 2007 7:18 PM ET | Delete
Nobody said that he isn't amazing at what he does, but let the rest of world hate him, because he makes the rest of the hockey fans out there want to hate him. Kind of how Tucker was when he was younger. He brings something the team that a goal scorer doesn't.
red_avi9

December 31, 2007 4:35 AM ET | Delete
For what it's worth I still tend to believe he said something dumb about Blake. Berger had more to lose by lying than Avery. Once called out Berger could either retract his statement, give away his source.. or get sued. It wasn't a hard call. Even if he didn't say that it wouldn't be out of character at all which is why it's so believable.I don't hate Avery and I never have. He's one of my favourite players because A) he gets the job done, and B) he's hilarious. If there were more players like him in the league sure there would be less respect on the ice, but there'd also be more fans in the stands.
PwozNYR

December 31, 2007 2:39 PM ET | Delete
I got to see him play here in Cincinnati when he played for the Mighty Ducks (now defunct) in the AHL. He was fun to watch.
DASRMD

January 1, 2008 4:50 PM ET | Delete
I agree Avery is somewhat effective. But if Larry Brooks is correct in that it will take $4 Million a year to keep him after this year, I couldn't justify that much for someone with such limited talent who still takes bad penalties.