Posted 12:48 AM ET | Comments 0
PART 5 IS OUT, OFFENSE #5. VIEW IT ON HTTP://MY.HOCKEYBUZZ.COM/TAG.PHP?TAG=RAGS2RICHES
AND COMING TO THE HOMEPAGE SOON!
Im sorry that it took so long to get this installment out. Ive been very busy for the past few days and havent had a chance to write. Moving on, we are up to part 4 of the series and as always, dont hesitate to comment on my writing. Ive just learned how to put pics on a post. So from now on there will be more than black and white on the blog. Part 4, Here we go:

Strengths: Petr is a hard working, young forward with potential to become a star. He has a deadly wrist shot that has netted over 50 career goals over 2 seasons. Although he is not a big player, he does not shy away from contact, often checking players much bigger than him. He plays with alot of heart and will hustle back on defense, play hard on the forecheck and block shots. He scored many of his goals on the power play and could end up with the top unit this season. His speed, hard work and great shot should aid him in his development and with a solid third line and more power play time, he should have his best year yet.
Weaknesses: Prucha struggled last year and suffered a decline in productivity. He was constantly changing linemates and got less ice time with the addition of Shanahan and Cullen. By bringing in Drury and Gomez, the Rangers effectively sentenced him to another year on the third line. It will be diffucult for him to produce with limited minutes. Physically, Prucha is small and can be easily knocked down. He does not win alot of battles for the puck, despite the great effort that he shows. If he cant find open space, Prucha may suffer as he did last season.
Why Line 3? Adding Prucha to the third line gives the Rangers great depth. He will be playing with fast and talented linemates in Avery and Callahan and if he gets enogh ice time, he should get back to 30+ goals.

Advantages: There is no question that Sean turned around the Rangers last year. He is a tough player who added grit to the Rangers soft lineup. He is hated by his oppenents and cannot resist and oppotunity to get under another player's skin. He will stick up for his teammates and his presence really fires up the team. Coming off a career year, he showed how underrated he is offensively and he can hit the corners with his accurate wrist shot. He is a good checker, despite his small size, and brings a good set of skills as an excellent two-way player. He scored quite a few game winning, clutch goals last season and now playing a full year with his new team and loving fans should boost his stats.
Weaknesses: Sean and the Rangers did not leave the arbiration hearing on good terms. Sean understands that hockey is a buisness but he was clearly not happy about being called "a detriment to the team". He got a lot less money than he wanted and he may just decide to prove Sather right and continue his bad play. He has questionable discipline and plays "on the edge", a formula that can make for a lot of penalty minutes. The Rangers will be more successful with less penalties and he will need to stay in control. He is also a small player and with linemates no bigger han 6 feet and 200 lbs, he will struggle to establish good physical play.
Why Line 3? Avery played well as a center last season and his speed should fit with his quick linemates. He also adds depth and is an ideal third liner who can play a checking role as well as a scoring role. 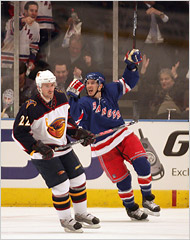 Advantages: In his brief stint with the Rangers, Callahan showed great skill. He has a good shot, good speed and like Prucha, will not shy away from physical play. He should flourish in his first full year with the big club. He will be playing with a fast line and should score goals off of turnovers and on odd-man-rushes. He is a great forechecker and forces many turnovers. He also has a knack for creating room for himself and driving to the net. He showed ability to score from right in front and has excellent hand-eye coordination for deflections and putting in rebounds. He showed good maturity, presence and hockey sense in the pressure filled playoff enviroment as a rookie. The Rangers are expecting big things from him and he should live up to those expectations.
Weaknesses: Ryan is a solid player but he does not have great skill yet. Despite being a good player overall, he does not bring any single, amazing skill to the table. He will be seeing limited minutes and is still developing as a player. He is inexperienced and has yet to prove that his 14 game success will translate into good play in a full 82 game season. This makes him a definate question mark and if he does not get off to a good start, he will find himself in AHL Hartford. He is also small and if he and his linemates cannot win physical battles and get him the puck, he will see a drop in his development and productivity.
Why Line 3? Ryan is not a second line player yet and needs to get playing time on the third line. He shows a lot of potential and should be a good fit in a young, talented line.

Line 3 Grade: B-
This is an young line with good talent. All three players have their best years ahead of them. Each player has a good shot, good speed and plays hard. However, they are not yet great players. As a whole, they are very small and will have to create chances using their speed. With limited minutes, there will be less opportunites to create turnovers and rushes, plays that will create most of their scoring. They will not be able to keep the puck deep for long periods of time and with less ice time, they will have chances to maintain an attack. But this is an excellent third line and their collective effort should be make for a good year.