Avery vs. Simmonds: A Waste of Our Time

Posted 12:34 PM ET | Comments 12
The war of words is already in full force among fans of the NHL, more specifically supporters of the New York Rangers and Philadelphia Flyers. "Wayne Simmonds is a hypocrite." "Sean Avery is a scumbag." "(Insert player of choice) committed the worse crime."

Comparisons to other cases of unsportsmanlike conduct have been made.

But the truth is that derogatory and discriminatory comments are sportsmanlike conduct.

That is the way that athletes act, in every sport and at every level. Even you and I may act that way, when put in competitive and intense situations. The fact that athletes are put in such scenarios very often, and in the public spotlight, makes the “problem” seem much bigger than it actually is.

A minor league referee tweeted, in the wake of this incident, that he hears anti-gay slurs and other derogatory comments, being thrown around multiple times per game. These remarks are made in the heat of the moment, out of anger and frustration, and to gain an edge over the opponent. Players like Avery are able to make a living in professional sports because of the power of their speech, even if their purely athletic capabilities are not up to par. Certainly many players with legitimate skill also engage in the trash talking game to gain an edge over the opposition. 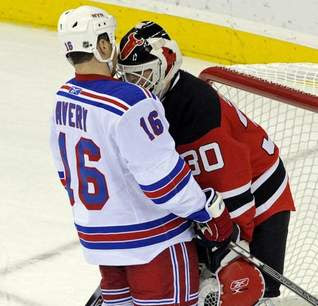 In the case of Avery vs. Simmonds, the Rangers forward knew what he was doing when he threatened to “kill (expletive) Giroux.” He put out the bait, hoping it would throw one or many Flyers off their game. He has done the same in the past to Ilya Kovalchuk, Martin Brodeur and others, with great success. And it worked again.

So the only real significance of this incident is really how effective Avery was in this instance. His game is built on disrupting the other team, and even Simmonds admitted that Avery’s comments got under his skin. It got him to take a roughing penalty. It distracted him from the real point of the game: winning. If not for a later unsportsmanlike conduct penalty taken by Avery, it would have been exactly the type of game he needs to play to make the team.
So the shame is not that these comments were made; that is the norm. The shame is that it was caught on camera and microphone, and then put out there for millions of people to witness, among them people who may truly be hurt by the comments.

But after reading a compelling article on http://puckbuddys.com/, even this does not seem to be a major issue. Yes, the word used by Simmonds is derogatory, and should not be used in any context.

But is anyone sitting at home, eavesdropping on a conversation between two strangers, really going to be very hurt by hearing an anti-gay slur, not even meant in the literal sense? Simmonds could have chosen any other word to call Avery, so is that fact that this particular one popped into his mind going to harm the gay community?

You may not like Simmonds for his choice of language, and you may not like Avery for about one billion reasons. But this incident is not an NHL problem. Right or wrong, it is part of the game, and part of life. And until society as a whole changes their approach to derogatory and discriminatory language, it will remain part of life. Certainly, the actions of these two players does not warrant the hate being exchanged between fans over this issue. That is the real hypocrisy.

So let’s just get back to the real reason we turned on the game on Monday night.

Continue to dwell on it in the comment section below

"Opinion Blogs" near the end of the work week.
"Weekly Recap/Preview Blogs" every Monday

September 28, 2011 3:04 PM ET | Delete
Agreed, my worry is that THIS is going to be the focus of the HBO's 24/7 documentery. If it is I swear to God I will kick both of their Asses... especially Avery for bringing this to the media. Right or Wrong it should have stayed on the ice.
Rags2Riches

September 28, 2011 3:52 PM ET | Delete
Yeah, this is not what we want the focus to be. Although I dont blame Avery for it getting out, people were talking about it before Sean spilled the beans. It was caught pretty clearly on camera. Wish it would have stayed on the ice, eitherway.
mattsotheran

September 28, 2011 9:21 PM ET | Delete
can't believe avery would bring that out into the open. that's a part of the game that stays with the players and officials.
mattsotheran

September 29, 2011 4:00 PM ET | Delete
I don't think Avery brought it out into the media. The video footage was already out there, he simply confirmed what snyone who saw the footage already knew; that Simmonds really did use that word. Agree that the issue has been blown out of proportion and I hope it doesn't become a storyline for the Classic.