Rangers vs. Devils: The War Begins

Posted 7:47 PM ET | Comments 6
For entertainment purposes, hit the link below and crank up the music.

The playoffs are finally here. The New York Rangers will face off against the New Jersey Devils in a best of 7 series that will decide which team will move on to the second round of the Stanley Cup Playoffs.

This rivalry is one that stretches back for years. However, the real excitement began in 1994 when the Rangers stunned the Devils in the Eastern Conference Finals en route to the Stanley Cup. The series was dramatic, with Mark Messier guaranteeing victory in Game 6 when the Rangers were facing elimination and following through with a natural hat trick to fuel a comeback win. Then, the Rangers were sent off to the Stanley Cup Finals with a double-overtime, wraparound goal by Stephan Matteau, Matteau, Matteau.

The Devils answered back in the new millenium, scoring two Stanley Cups while the Rangers were in the midst of 8 years of playoff futility. When the Rangers finally made the playoffs in 2006, the Devils were waiting for them, sweeping the Rangers in the first round and denying their first playoff victory for another year. Now, fate has brought them together again in what promises to be another dramatic series.

The Rangers were 7-0-1 against the Devils this season, their only loss coming in a meaningless shootout. 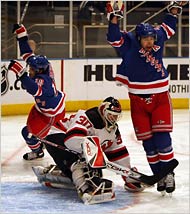 However, the Devils come in with confidence, knowing that Martin Broduer has the will and power to stifle the Rangers' hunt for a Stanley Cup. The regular season games mean nothing, its a whole new game when the playoffs come. It will be a battle of offense and defense, of special teams and goaltending.

But it will also be a physical battle with each team trying to pulverize the other on every shift. These teams hate each other, these fans hate each other and the raised stakes will only serve to intensify the conflict. At the Rock, they will be chanting "Rangers Suck" while at the Garden they will be chanting "Devils Suck". All of the pain and hate these teams have inflicted upon each other will come out. There will be hard hits, there will be fights, there will be meetings of Avery and Broduer. There will be all the drama that comes with a regular season game but it will be intensified hundredfold. Because only one team will get those four wins.

But it will most depend on which team wears its emotions on its sleeve. Which team channels its will towards playing the best hockey they can. It is a balance of using emotions without being used by them. It balancing on the line that Sean Avery so often straddles. It will come down to the response. What each player on each team says when the question is asked on every shift, after every hit, after every crushing goal, after each frustrating save, after every loss, and every moment of adversity. It will depend on how they respond to the most important question:

April 7, 2008 7:05 AM ET | Delete
Both teams should buy redbull for the fans for the duration of the series. It's the only way they stay awake for any of these games.
Texhorns02