Goal Celebrations: How Much Is Too Much

Posted 11:02 AM ET | Comments 6
When the Tampa Bay Lighting came into lower Manhattan to face the New York Rangers, they were expecting a war. But when Artem Anisimov scored a shorthanded goal in the second period, things got a little too literal for Vincent Lecavalier and company.

After a few seconds of celebrating with his arms in the air, Anisimov turned toward the Lightning end of the ice, pretended his stick was a rifle, and "fired." The Lightning took exception to this, leading to an on-ice brawl that lasted several minutes and resulted in 38 total penalty minutes.

Before the smoke cleared on the ice, the battle of opinion was already well underway in the hockey world, as fans and media weighed in on the incident. The main debate centered around one question:

Did Anisimov go too far?

Most hockey fans don't seem to mind goal celebrations. Yes, it rubs salt in the wound when your team surrendered the goal. But for everyone else, it adds humor and excitement to the game. Some celebrations come from sheer joy and passion on the part of the player, while others are just plain showboating. But either way, there is usually nothing wrong with going crazy after scoring.

In this case, Anisimov made two mistakes, which combined to make his actions unacceptable. First off, his celebration mimicked a violent act of shooting a gun. This is not wrong per se; most people have seen Teemu Selanne's famous celebration in which he throws up his glove and "shoots" it out of the air. There was nothing wrong with that. But in this case, Anisimov not only pretended to fire a gun, but did so in the direction of the Lightning team.

It is very likely that Anisimov did not mean to "shoot" at the Lightning players, or goaltender Mathieu Garon. He probably intended his gesture to be directed at the inanimate net. Even if he was aiming at an opposing player, he was probably caught up in the excitement of the moment, and did not think about the severity of what his celebration really meant.

Nonetheless, it was a mistake. The Lightning had every reason to take offense to Anisimov's actions, and the brawl they instigated was justified, for the players who were on the ice at the time anyways. We have become familiar with the terms "intentional" and "reckless" thanks to the supplemental discipline videos produced by the NHL Department of Player Safety, and while some may believe such terms are not applicable to goal celebrations, we certainly feel it is a perfect way to describe this incident.

Players are responsible for their actions on the ice, and that does not just mean they should not intentionally do wrong. It means they need to avoid situations that may lead them to do wrong, whether that be by keeping their sticks down, being extra careful when throwing a hit, or not firing at the opposing net. What Anisimov did was reckless, if not intentional, and therefore it was wrong. 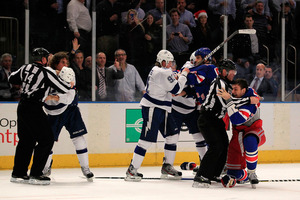 He does not deserve a suspension. He does not deserve to become a pariah. But he deserved the penalty for unsportsmanlike conduct. He deserved the reaction of the Lightning team. After the game, Captain Ryan Callahan and Head Coach John Tortorella indicated that what Anisimov did was wrong, and Anisimov apologized to his teammates. Everyone involved in the game, both clubs and the refs, seemed to think it was out of line, and we are inclined to agree.

This is not the NFL. Celebrating is fine, and should even be encouraged. Red hot sticks, Olympic diving, and horseback riding are great ways to express the joy of scoring a goal. But keep it clean and keep it to yourselves.

December 9, 2011 12:10 PM ET | Delete
Exactly, he's a kid who made a mistake and the Lightning called him to the carpet. There is no reason for anything else. I'm sure Torts ran his ass over after the game anyway and thats worse then anything Shanahan could hand out.
hockeypunk36

December 9, 2011 1:33 PM ET | Delete
Exactly, if he did a different kind of celebration where he didn't "shoot" anyone his would have never happened.
hockeypunk36

December 9, 2011 6:47 PM ET | Delete
He made a mistake, apologized, and he and Torts both handled it very well.Time for all of us to let it go.
vowswithin

December 12, 2011 11:04 AM ET | Delete
Everyone is making a big deal about this, its not a big deal. Just like when Linus Omark did a spin-o-rama and everyone started getting upset. A goal is a goal, take it for what it is no matter how fancy or gritty. And I am sure his celebration was just that: a celebration. I feel there was no need for him to apologize.