Yep. Those guys. The ones who fought their way to a couple of Stanley Cups and who still get labeled as goons by lazy journalists today. Some people forget that in addition to a stellar coach and 3 Hall Of Famers, those Bullies teams had some very talented supporting players, like Rick MacLeish, Reggie Leach, Gary Dornhoeffer and Jimmy Watson.

Still, those dudes fought. A lot. It was a big part of the game when I was a kid and I still enjoy a good donnybrook now, as a immature 30 something guy who watches about 15 games a week.

I obviously don't watch that much puck hoping for fights. If fighting were banned tomorrow, I doubt I'd watch any less hockey. I'd still follow the sport to the point that my wife hates it and my kids, whatever their names are, don't see me much. But, fighting doesn't have to be killed off.

What should be done is a bit radical, especially for the NHL. They should simply go back to something old that worked great and would work great again. Eliminate the guy who can't play and gets a check just for fighting

and replace him with a guy that can be a policeman.

Let's face it, a typical NHL heavyweight rarely fights a guy who takes a run at his team's star players. He fights the opposing team's heavyweight. How, exactly, is that deterrent? Is the mere presence of Riley Cote going to make Ryan Hollweg think twice about running Mike Richards? Nope. Is Sean Avery going to tremble in fear because Eric Goddard is dressed? Nope. Is any agitator in the sport going to stop agitating because of an opponent's heavyweight? Are the guys that chronically hit from behind going to stop? Nope.

Not when those heavyweights only fight one another. 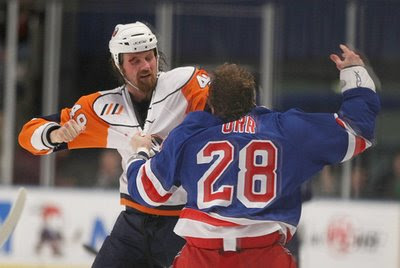 First, any fight off a face-off, to me, is a staged fight. Granted the seed might have been planted a week ago, or a earlier in the game. Well guess what? Two cementheads banging knuckles off skulls isn't going to affect what happened at all, especially when neither guy practicing brain surgery was involved in the initial incident.

I realize that those fights can be fun to watch for fans, but they are little more than sideshow.

Second, refine the instigator. Right now, the instigator is the guy that threw the first punch 99% of the time. But, if a guy like Sean Avery is causing fights with his mouth or stick, shouldn't he be labeled the instigator? Then refs need to make that call. If a defenseman runs a forechecker from behind and into a wall, and the result is a fight, the dirty hit is what instigated the fight, not the guy protecting his teammate.

Third, call guys that instigate and then turtle for fighting, too. This way, when a guy like Bobby Holik hits a guy with a high elbow and turtles, he gets a penalty and potentially hurts his team. That might make some of these turtles a bit less brave when it comes to dangerous hits and stickwork.

Now, one side effect of the third point would probably be a guy skating up to a star player late in a game and start punching away to get him off for 5 minutes. In a case like that, the guy would get a game misconduct, his team would have to face a penalty for unsportsmanlike conduct, and he's subject to 3 game suspension if the league reviews the play and decides that the intent was there.

Fourth, Find a level of consistency in both on and off ice officiation. Suspensions can't be handed out based on whether anyone was hurt, but rather on the danger factor and recklessness of the incident. On ice refs need to start tossing guys who deliver obviously dirty hits-and be consistent with it.

These are just some ideas I had. Hopefully, the league will surprise us all and do the right thing.
Filed Under:   Jsaq   fighting   goons

March 11, 2009 9:45 PM ET | Delete
You don't tug on superman's cape. You don't spit into the wind. You don't pull the mask off the old Lone Ranger, and you don't expect the NHL brass to make a researched, calculated, sensible decision.
mayorofangrytown

March 12, 2009 12:53 PM ET | Delete
Nicely put, especially your point on how suspensions are handed out. Suspending only in the event of injury has absolutely not been a deterrent.
Hop Head

March 12, 2009 2:07 PM ET | Delete
If the NHL is ever gonna hope to even get close to competing with other major sports for viewership, the meaningless fighting would have to cease. Novice fans can`t get passed the cliche of " I went to a hockey game and a boxing match broke out" mentality.
Ron Guillet

March 13, 2009 10:30 PM ET | Delete
When did I say that Avery couldn't play? His main role is to agitate and that leads to the pointless fights between the Orrs and Cotes of the league. Grow a thicker skin, dengler.