Translated from Italian it actually reads The Good, the Ugly and the Bad. Linguistics notwithstanding, Clint Eastwood's performance in the starring role in this 1966 spaghetti western, directed by Sergio Leone, is far and away the best Western ever made. Period. End of Sentence. It is in my personal top 3 favorites and forever enshrined Clint Eastwood as one of the baddest (and coolest) men in all of film.

I know you want to hear it. I know this haunting tune is running through your head, just about....now
http://www.soundamerica.c...av&tname=goodbadu.wav

I don't know about you, but when I hear that it makes the little hairs on the back of my neck stand straight up. TMI, I know.

The scene of the mexican standoff at Sad Hill Cemetery between Blondie (Clint), Angel Eyes (Lee Van Cleef) and Tuco (Eli Wallach) might be my favorite scene in all of moviedom and one of the best directed.

Thanks for indulging me. On to hockey. After a 5-0 victory against the Rangers, the Flyers lost 3-1 to a determined Devils team who showed grit and toughness - just what you would expect from the team from up the Turnpike. 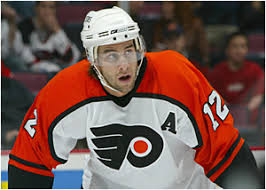 Simon Gagne picked up another point last night on a beautiful pass from behind the net to Danny Briere, who potted his first goal of the preseason. Briere and Gagne (and Knuble, as well) have begun to create some visible chemistry together. Gagne seems to be in a real groove in the preseason and a fast start by #12 might help further gel this line into one of the more deadly in the league.

The Bad:
The Bad just has to be the save that backup goalie Frank Doyle (who?) made on an attempted roof shot by Simon Gagne in front of the net with just 27 seconds left after a a key faceoff win by Mike Richards. Gagne was shaking his head at the bench looking up at the replay as Doyle stacked the pads and denied Simon a game tying goal. He was truly robbed. Tough luck on a great effort by Mr. Doyle - there is your 15 seconds of fame.

The Ugly:
Flyers agitator Steve Downie (5'10" 189 lbs) had an impressive showing in a fight against 6'6," 226 pound Rangers RW Hugh Jessiman, where Downie pummeled a guy who had more than 7 inches on him in height,. However, then came the The Ugly

After Jessie Boulerice had two rather decisive victories against Cam Jannsen when the Flyers played the Devils the last on September 17th, Boulerice was flattened as he took a one punch knockout from the right hand of Rangers' RW Colton Orr. Jesse got off a few quick punches before the right from Orr sent him to the ice. To his credit, Boulerice got up quickly.

Boulerice may have seen better days as an enforcer and it looks to be between he and Riley Cote - who has fought four times this year and done well - for the job as the new sheriff in town. My money is on Cote as the enforcer and Eager/Downie as the Pests who can play. Downie does not make the team, in my opinion, but I do like what I have seen out of him in his willingness to get dirty, score goals and play with intensity. Both Downie and, fellow 1st rounder, Claude Giroux have bright futures within the Flyers organization...just not this year. Where Downie brings the spit, Giroux brings the polish as he has shown flashes of brilliance in his play during and after the Summit Series and into the preseason with the Orange and Black.

Thanks for reading The Good, The Bad and The Ugly.

September 25, 2007 12:00 PM ET | Delete
I felt as though Gagne waited too long to get the shot off....but my seats were all the way down in the opposite corner of the ice so perhaps I didn't get as good of a look as you did. I am high on both Downie and Giroux but agree that there is little reason to rush either of them. Looks like kids like Potulny and Ruzicka may be burried on this team.
Number23

September 25, 2007 12:26 PM ET | Delete
I agree with nastyflyergirl. He tried to cup the puck to lift it. Instead of shooting right away. But it's a bang bang play. Jeff Carter needs to pick it up
CaptShark

September 25, 2007 12:37 PM ET | Delete
Nice blog. Anything with Clint in it is great. Agreed though , Downie wont crack the roster , but I think Giroux may see some time with the team in a few stints this year.
steal_your_faceoff

September 25, 2007 12:38 PM ET | Delete
Agreed NFG and MJL, it looked like he could have tried to shoot it right away but it seemed like Doyle was already down so Simon tried to roof it. It was a bang bang play, as you mentioned, and he made a nice shot and Doyle made a ridiculous save. By the same token, at least one of the two Devil goals was one that Biron would like to have back. Both were from the blue line and should have been stopped. Thanks for the comments. SYF
CAFlyersfan

September 25, 2007 12:57 PM ET | Delete
Good blog SYF. I agree with all of your comments. As for NCShark - I'm not sure if you're aware, but if Giroux doesn't make the team, he won't be back this year unless it's a very late season/playoff call up. He is too young to play in the AHL, so he's going back to juniors. I do feel that he could be competitive on the big club, but it won't hurt him to spend one more year in juniors either.
steal_your_faceoff

September 25, 2007 1:01 PM ET | Delete
Correct CA and having Giroux on a 4th line in Philly makes absolutely no sense for the Flyers or Giroux's development. He is a bona fide talent and needs more meaningful minutes in Junior. He will wear Orange and Black for many years to come...no need to rush him now.
CAFlyersfan

September 25, 2007 1:42 PM ET | Delete
I agree totally SYF. I would be shocked if he doesn't make the team next year though. The knock on him has always been his size, but to be honest, I didn't think he looked that undersized last night or in the practices I've been to. In fact, this team is noticably smaller than in past years with Timonen
hockeylover

September 25, 2007 2:11 PM ET | Delete
Good blog. Althoug I didn't see the second goal, I believe that the first was above the faceoff circle and not from the blue line. Agreed though that it should have been stopped.
MJL

September 25, 2007 2:17 PM ET | Delete
Ncshark, it is impossible for Giroux to be on the Flyers for a few stints, as you put it. He is not eligible to play in the AHL. He has to play for the Flyers or be returned to his junior team.
steal_your_faceoff

September 25, 2007 2:21 PM ET | Delete
Forgive me....from long distance - those shots were airmailed. He should have stopped at least one of them...but so is the life of a goalie. That being said, Biron has played very well so far and looks to be very calm and very collected in net. I have high hopes for him this year. SYF
CAFlyersfan

September 25, 2007 4:32 PM ET | Delete
Giroux has been returned to junior. I think Boulerice and Downie will make the team, Downie combines skill and decent hockey sense with his grit, and will beat out Eager for a roster spot. Boulerice will make the team, but if he loses more fights than he wins, he will be replaced by Cote. I agree that Carter needs to pick it up. That being said, I would like the Flyers to try the following line combos: Gagne-Briere-Knuble (obviously!!), Hartnell-Carter-Upshall, Lupul-Richards-Kapanen or Downie while Umberger can center an occasional 4th line with Boulerice and Downie and also spell players on the top lines occasionally.
ginogold