Posted 10:39 AM ET | Comments 15
"Welcome back my friends to the show that never ends
we're so glad you could attend come inside, come inside"

Emerson, Lake and Palmer (ELP) wrote those lyrics in 1973 - I was 5 - and embedded themselves in our rock and roll consciousness with a 29 minute 37 second exclamation of 1970s progressive rock.

You are likely saying, "What in the name of Robert Earl Clarke does any of this Republican Deadhead's nonsense have to do with Marty Biron?"

Nothing...other than the 2007-08 season is but mere weeks away, new ugly jerseys are hitting the shelves of stores near you, and the show's about to start! Meaningful NHL hockey is just a little more than a month away

"Welcome back my friends..."

), Robert Esche, and Antero Niittymaki. None of them was stellar, with Cechmanek totalling 35 wins in the 2000-01 campaign as the best since Hexy's Venzia season of 37 in 1987. Cechmanek was a talented goalie but was more "unstable" than most goalies are. Don't get me wrong, it is hard to play goalie and you have to be a little nuts anyway...but Cechmanek was more than a little nuts. There were hopes that Niitty would be that "next" really good Flyers goaltenderand showed incredible promise in 2006 after starting 17 consecutive games due to an injury to Robert Esche. He won Defensive Player of the Week honors for the week ending January 8, 2006 when he posted a 1.33 GAA and a .953 SV% with a shutout. He continued his strong play in 2006 by winning the MVP of the Tournament in the Winter Olympics in Turin, Italy and leading the Finns to a Silver Medal. In the 2006-2007 season, he was injured a good deal of the season with a torn labrum and spent time battling Robert Eshe for playing time.

Enter Marty Biron. Marty Biron has the chance to head into the 2007-2008 season as the undisputed #1 goalie. Niitty will serve as a very capable backup and the tandem has the potential to be one of the better duos in the league. But make no mistake, this is Biron's show and he is driving the bus. He will certainly be buoyed by a revamped and vastly improved defense anchored by, outstanding leaders and former Captains of their respective teams, Kimmo Timonen and Jason "The Gator" Smith. His offense picture is brighter with the additions of Danny Briere, Joffrey Lupul, Scott Hartnell and returning former Pred Scotty Upshall. Add to that the veteren leadership of Simon Gagne, Mike Knuble, Sammi Kapanen and Derian Hatcher and there is a great deal of hockey minutes on the squad. The returning young guns of Jeff Carter and Mike Richards should continue to improve and give quality minutes on the second and third lines, respectively. Biron has a much better environment in which to be successful than he did when he came to the Flyers. Now all he has to do, is produce.

Biron is said to have a very level head on the ice, coupled with the inherent cockiness and swagger that you want your #1 goalie to have. He is very quick and used his agility and lightning quick left glove hand to frustrate would be scorers. He has all the tools to be a #1 goalie in the NHL. He will have to do it at the Bank Building in front of as rabid a group of fans as their are in the league. He was beloved in Buffalo and will, in my opinion, be a fan favorite in Philly for many years.

I am hopeful of wins in the high 20s, a GAA of under 2.9 and a SV% of above .905. That is certainly within the bounds of reason and, if accomplished, should lead the Flyers back to the promised land of the playoffs...where anything can happen.

"come inside the show's about to start
guaranteed to blow your head apart!"

Good luck Marty...we are rooting for you! 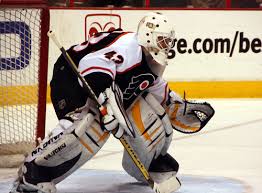 August 31, 2007 11:42 AM ET | Delete
Good stuff SYF. It has been said that Biron is a slow starter by some Sabre fans. Here's hoping either they're wrong or Biron changes and gets off to a solid start. I'm gonna go out on the lim here, Biron wins 35 this season.
hockeylover

August 31, 2007 12:19 PM ET | Delete
Saying that marty split time time with Miller is a bit misleading. There was a small amount of doubt, and an injury to Miller, in the 05-06 season, but it didn't take long to fogure out who was number 1 and who was just one of the best backups in the league. As for wins, that depends mostly on the team in front of him, and how many games he plays. he is good, but he won't carry the team.
steal_your_faceoff

August 31, 2007 12:46 PM ET | Delete
Thanks IMT - admittedly I am not as close to the Sabs as you appear to be. I am hoping he will only have to do his job and let the team in front of him win some games for him. What I also hope is that he has the skills to steal a few games from the jaws of defeat. Thanks for reading! SYF
FLAMESTR

August 31, 2007 1:33 PM ET | Delete
Excellent work SYF. Love the prod rock reference, think I will listen to Discipline by King Crimson now. I expect a slow start from the whole team, it will take a while for all the new members to gel. We just need to make sure we don't get in a hole too deep. I guess in summary...LETS GO FLYERS!!!!!
steal_your_faceoff

August 31, 2007 4:41 PM ET | Delete
Marty will be a wonderful goaltender for the Flyers because he will have a better defensive team to play behind rather than the Sabres offensive team. I think that Marty didn't live up to what he could do production wise as a goaltender in Buffalo because he didn't have enough defense to back him up. I however think that he did have a wonderful mentor in Miller and that he taught him a lot before he left to venture into his own career as a starter for a NHL team. I wish him the best and everyone here in Buffalo loves him still and also wishes him the best. Those who think that when players leave people talk a lot of crap, he is an exception to that rule. Good luck Marty!Very nice blog Steal, I loved it!
ladynic

September 1, 2007 8:34 AM ET | Delete
Good Post. I hope that the Flyers really have gotten this right I don't think we have had prime 1st goalie since Hexy.
steal_your_faceoff

September 1, 2007 11:12 PM ET | Delete
Agreed Nic. I would love this to be a Pelle Lindbergh and not a Sean Burke.Thanks for posting.SYF
CreaseCop43

September 3, 2007 4:27 PM ET | Delete
About the only accurate statement by those Sabs fans here is that Marty has often been a slow starter. This year may be different. Marty trained like a fighter this summer, basically trading the golf clubs for the weights. His focus to prepare for this season has been different than any other summer. He is finally in an organization that has committed 100% to him and he is preparing to make sure they do not regret it.
Thach

September 3, 2007 7:47 PM ET | Delete
I hope that Marty is great for the Flyers. He deserves that starting spot and as sad as I was to see him go, I am happier that he will finally be able to get his chance at starter and show everyone what he is able to do.