Philadelphia Flyers: How Long to the point of know return?

I heard the men saying something
The captains tell they pay you well
And they say they need sailing men to
Show the way, and leave today
Was it you that said, "How long, how long?"

They say the sea turns so dark that
You know it's time, you see the sign
They say the point demons guard is
An ocean grave, for all the brave,
Was it you that said, "How long, how long,
How long to the point of know return?" I have to admit that I just loved Kansas when I was growing up and that Point of Know Return was one of my first LPs back in 1977 - I was 9 at the time. I still love to listen to Kansas. The older I get, the more I begin to appreciate what a great era in music the late 70s was. But I digress...

It was a common practice for cartographers to put "here be dragons" on maps to depict dangerous and unexplored parts of the globe. Just as common was the belief that sailors could very easily fall off the face of the map (since the world was flat). The Kansas album cover displays just that - a sailing ship falling off the end of the world. It was a common belief that there was a point from which there was no return. Sailors of that era knew that sailing great distances, away from known routes would likely not afford them a long life and could very well introduce them to the likes of 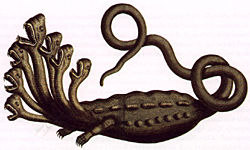 . You get the idea...the point of no return might be out and knowing it only made it more scary.

So why did Kansas make a point to use the word "know" when speaking about the "point of know return"? Perhaps it was the belief that sailors went to sea knowing they might not come back or being aware that their fate and destiny lay outside of their control? Whatever the reason, knowing you are - or could be at any moment - coming to the point of no return must have been a heady proposition.

It said that when you could see it
You cried with fear, the Point was near

So too it is with the Philadelphia Flyers. The point is near. The point of know return is 2/2608 at 3pm - the trade NHL deadline. Ek's "Trade Deadline Countdown" is ticking down on twelve days remaining. Paul Holmgren knows it. John Stevens knows it. The calender knows it. We fans know it. Is there know excuse for the Flyers not to upgrade the team for a shot at the postseason? I know what my answer is - and it isn't know. So what to do?

Do you mortgage the future by trading someone like Ryan Parent for a more established offensive defenseman - like Kaberle? Do you shoot the moon and go after Dan Boyle and hope to somehow resign him? Do you try to trade an injured Scottie Upshall knowing that you are trying to open a spot for a maybe-healthy Foppa? Do you keep things as they are and add a second tier guy like Martin Gelinas or an average defenseman like Jaroslov Modry? I don't know. I know that things are not well in the land of Flyerdom. The last four games have proven that beyond a shadow of a doubt. What a difference a few games makes.

The dragons are out there. Braydon Coburn has a ruptured artery in his posterior (who drew the short straw to have to make that diagnosis?). Simon Gagne's 3rd worrisome concussion brings back shades of #88 and the thought of a potential first line curse. Scottie Upshall's high ankle sprain causes you to wonder if his playing style will ever lend itself to him playing healthy for any length of time - and puts a damper on our most tradable asset. The team has lost four horrible games in a row. The covering of defense assignments has been abysmal, the mano-a-mano battles are being routinely lost and the Flyers cannot seem to score at even strength. It seems like this ship is quickly sailing to the point of know return and needs to be brought back onto the map if a shot at the playoffs is in the cards.

Was it you that said, "How long, how long
To the Point of Know Return?

What would you do Flyers fans??? What do you think the Flyers will do? Inquiring minds want to know!

February 14, 2008 12:22 PM ET | Delete
I f*cking HATE Kansas!!! ARRRRRGGGGGGGGGH!!! With that said, if I'm the Flyers, I agree with Homer's comment yesterday that the team doesn't need to do "anything crazy" at this year's deadline. If the "right" deal comes along, by all means, jump on it; otherwise: tweak the roster, see where it takes you, and continue the resurgence this summer.
szandor

February 14, 2008 1:21 PM ET | Delete
Nice job SYF. If I was Homer, I wouldn't do anything. We knew this would be a rebuilding year. At the beginning of the season everyone had us not even making the playoffs. We obviously have exceeded expectations. Let's not worry about a cup this year. Let's make the playoffs, let the young guys get some experience and focus on development. No reason to chase something out of reach this season when we could have many good seasons ahead.
CAFlyersfan

February 14, 2008 3:47 PM ET | Delete
Seriously, were you just trying to get a comment from Garth on this blog? : ) (remember, he wrote a whole blog about kansas?) I think if there's a chance that we could get a Boyle or a Kaberle, you do what you need to do. I don't expect us to win the cup this year, but it ceratinly wouldn't hurt if we could have Kaberle, Timonen,
RPR

February 14, 2008 5:09 PM ET | Delete
SYF, you made this blog very interesting, even for someone who really doesn't care what moves Philly makes!
gforce

February 14, 2008 6:06 PM ET | Delete
Great again SYF. I think it'd be enormous for Philly to get Kaberle or Boyle, and a locked contract on either would be worth a great deal in youth. No rentals though. I'm not sure the Fly can be sold short on a great run as is however, that's one hell of a nasty and pretty talented team. Regardless, in the astronomically unlikely event the B's get bounced from the playoff before the finals, Philly's my team. Good luck, good to have y'all back. Sorry, it's Genesis and King Crimson for me from that genre, can't win em all. Roll out the barrels boys.
gforce

February 15, 2008 5:14 PM ET | Delete
Just now catching your blog SYF. Interesting times abound and the next 11 or so days will prove interesting, not only for the trades that may (or may not) happen, but also regarding how the next few weeks reveal more about which teams have what it takes.