KGB. When I think of those three letters, I think of the darkest, most insidious element of the former Soviet Union's Communist regime. The "Committee for State Security" was the secret police, intelligence and security branches cobbled together to form one of the most ruthless, powerful and effective security agencies the world has ever known. From its inception in 1954 until it officially "died" in 1991, when the KGB came for you...you better have said your prayers because you were history.

A new chapter of the KGB's history is about to unfold in South Philadelphia. No, neither the rebirth of Communism nor the "Red Menace", but the 2007-08 Flyers version of the K-G-B:

Knuble - Gagne - Briere is the new KGB...and when they cross the blue line, your goalie had better have said his prayers. Thank you for indulging me on that play on the acronym. I am, however, very excited to see what this K-G-B line can do.

They have all the earmarks of a potentially dominant line:

Knuble- is a hard working right winger who is very good along the boards, can dish out and absorb punishment and can score in close. He had 24g and 30a for 54pts last year.
Gagne - is a pure goal scorer on the left side with speed, hands, vision and imagination. He can score in close, on the rush or with an accurate left handed shot. Gagne scored 41g 28a for 68pts last year.
Briere - is an elusive, speedy centerman with great anticipation, tape-to-tape passes and a sniper's touch. He scored 32a and 63a for 95pts in Buffalo last year.

K - I expect that Knuble's numbers go up simply because of the number of assists he will pile up as Simon and Danny score more frequently. I see something like 31g, 39a for 70pts as not too huge a stretch. I also see Knuble's value increase on the power play as he anchors that second unit.

G - With Briere feeding Gagne on the rush and the power play first unit - he is a mortal lock for 50 goals and 30 assists and at least 80 points...maybe more. He will get the puck to "where Mama hides the cookies" with regularity and be a treat to watch.

B - Danny will be hard pressed to score 95 points in the Flyers' system. That being said, he will be certain of at least 80. If he were to end up somewhere around 35g and 45a for 80 pts - I would not be terribly surprised and extremely delighted. My only concern is that Briere remains healthy enough to achieve those numbers.

If the Flyers' first line puts up those kinds of point totals, the team will be in great shape to win more games that they lost 3-1 last year because they could not put the puck in the net. The improved D should aid offensively by getting to the rush faster with an accurate outlet pass (no...not Joni Pitkanen) and letting the horses run. The D should also keep the Flyers in the game better, allowing Biron the opportunity to win some games and build the kind of confidence that is needed in a #1 netminder. Those things put together equals a trip back to the promised land of the Eastern Conference playoffs. 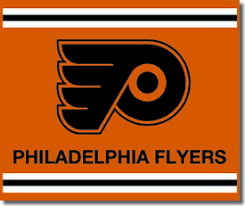 September 6, 2007 1:53 PM ET | Delete
That will definitely be a great line for you, but I think because of your 2, 3, 4, you will not be a playoff contender this year. Biron will be a major factor as well. I'm sure you'll have some surprises because Philly was always a strong team.
steal_your_faceoff

September 6, 2007 2:04 PM ET | Delete
Thanks pwoz. I respectfully disagree about at least 2 and 3. 2nd like will be Hartnell - Carter - Lupul and I have very high hopes for them. Hartnell adds grit and Lupul can be dynamic if he regains his form from Anaheim. Carter is ready to move towards becoming an elite center in the NHL. 3rd line is Kapanen - Richards - Upshall and they will be a pain in the *ss to play against and can score. I am excited about this team on paper...but much like the Rangers...there is a lot of gelling that needs to occur for all these new pieces to fit. Thanks for the post...I appreciate it.SYF
blueline

September 6, 2007 2:05 PM ET | Delete
A stylish presentation SYF. Will be an interesting year for the NHL, maybe more so than in the recent past. Predictions, no matter the source or subject, are all over the map...guess that's the norm...
blueline

September 6, 2007 2:09 PM ET | Delete
Hartnell is gritty, no doubt - and he'll go to the net and take some abuse. And young Upshall was so much fun to watch in the few games he played for us. Hated to lose him - for his enthusiasm, if nothing else. He will be an asset for the Flyers.
steal_your_faceoff

September 6, 2007 2:09 PM ET | Delete
Thanks Blueline...appreciate the read and the comment. Yeah I can't wait until we stop talking about hockey and start watching it to see how close we all are on these darn predictions. Thanks again! SYF
Rock34

September 6, 2007 4:12 PM ET | Delete
That line should put up a ton of points this season. I really cant wait to see Philly this season , I think they will be one of the better teams out East !
flyersfan2

September 6, 2007 4:48 PM ET | Delete
steal your faceoff wouldnt you think upshall would be on 2nd line instead of lupul?
BuffaloMat

September 6, 2007 6:23 PM ET | Delete
If you made up the KGB that's very clever and I salute you for it.I am not sure what you mean about Briere staying healthy though. He didn't have an issue last year that made him miss a lot of games. The only thing that really kept him out was the flu at one point.
Jsaquella

September 6, 2007 6:54 PM ET | Delete
The Flyers may also end up keeping the slick Claude Giroux, and he could be a dangerous element that makes the second line even more deadly.
jprobber

September 6, 2007 9:27 PM ET | Delete
Stylish hook, syf. Glad to see the Flyers have advanced beyond the collection of Western Canadian, ankle-smashing mutants which defined them for so many years. Flin-Flon nice in theory, but doesn't belong in the GM's office, let alone in civilized company.
teddye03

September 7, 2007 5:02 AM ET | Delete
when i think of those letters i think of Teddy KGB from the movie Rounders :P
Evil Tim

September 7, 2007 9:00 AM ET | Delete
Great blog as always, Deadhead! JProbber, "the collection of Western Canadian, ankle-smashing mutants" - that made me laugh out loud - excellent line! Bring on the season...I can't take any more Phillies games.
steal_your_faceoff

September 7, 2007 9:04 AM ET | Delete
The Phillies are just brutal. I also have to give props to JP for that glorious line about Clarkie's minions - nice work by you JP!Thanks for reading guys!SYF
CAFlyersfan

September 7, 2007 12:09 PM ET | Delete
Good lord do I hope you're right SYF! If things go the way you predict, we are a lock for the playoffs. I honestly can't see any way that the first line doesn't put up some huge numbers. The 2nd and 3rd should also be good as you say. God, i cant't wait for this thing to get started. Hell, I'm even going to rookie camp tomorrow, I'm so desperate!
szandor

September 7, 2007 12:39 PM ET | Delete
SYF, good job as always. Liked the "where Mama hides the cookies" line. My personal favorite is "he put the lotion in the basket."
FLAMESTR

September 7, 2007 1:19 PM ET | Delete
very good blog buddy great point Knuble is on one of my teams in fantasy hockeyteamsgreat job and good technique on your first line.
coffee junkie

September 7, 2007 7:06 PM ET | Delete
Great blog SYF- obviously put some time into it. As for some comments above- no
coffee junkie

September 7, 2007 7:08 PM ET | Delete
I dont see Lupul playing on the 3rd line since he isnt a defensive player, he either make the first two lines or isnt on the team at 2.1M. Girioux on the big squad jasqualla? And who would he replace, my hope would be to answer both of these questions the same way but what are your ideas.
ginogold

September 8, 2007 7:58 AM ET | Delete
Call me crazy, lord knows my wife does on a daily basis, but I think the Flyers are going to look for more balance in their lines a la Buffalo. I can see them going with following as their top three lines: Gagne-Carter-Upshall; Hartnell-Briere-Lupul and Umberger-Richards-Knuble. I still think the Flyers will add a strong faceoff/checking center before opening night and that player will skate between Eager and Kapanen.
jeffyjones