Bring Out Yer Dead...NOT the Phillies 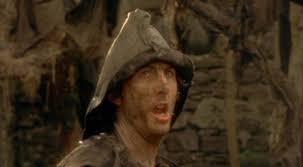 The National League East as portrayed by Monty Python:

Wait a second, I'm not dead.

Yes you are...you have no pitching, your bullpen is in shambles, your left fielder can't hit his weight, your star 2nd baseman broke his wrist, your first baseman set a major league record for most strikeouts in a season and your manager wouldn't know a double steal if it bit him on the @ss. You'll be stone dead in a moment.

I'm getting better. Oh, by the way...I just won the National League East and have home field advantage throughout the playoffs. My Ace pitcher is healthy and just threw a gem in the clutch, my 1st baseman just crushed another meaningful homerun and is on a tear, my 44 yr old hometown crafty veteran pitcher tossed 5 1/3 innings of one run, 5 hit ball to clinch, my left fielder is somehow hitting and my shortstop is not only prophetic but just put together one of the best MVP caliber seasons this town has seen since Mike Schmidt.

Bring out yer dead...you must mean the Metropolitans? Those guys in blue and orange that had the 7 game lead with 2 1/2 weeks to play? The ones that got swept by the Phillies not once, but twice? The ones that lost 2 of 3 to the Nationals and were swept by the Florida Marlins? The one with future Cooperstown shoe-in hurler Tom Glavine who got sand kicked in his face by one of the worst teams in baseball? The ones with Jose Reyes and David Wright and Carlos Delgado? Oh...and that mouthy closer? Yeah, the Mets. Stone dead.

Tell Major League Baseball that the Phillies are not dead. Oh...and their getting better.

p.s. - If Jimmy Rollins doesn't win the National League MVP, then *edit* Matt Holliday must have pics of the Commissioner with farm animals.

Go Phils! (and that from a Red Sox fan)

October 1, 2007 12:36 PM ET | Delete
You forgot the end of the scene. MLB hits Phillies on the head when no one is looking, gets his money and keeps going. How many times as Philly fans of any sport have we been given a last minute rush of hope just to watch it "run away, run away" a few weeks later? Good blog though, hard to go wrong with such a great movie.
squishface

October 1, 2007 12:52 PM ET | Delete
Us Phils fans have waited a lonnnnnnnnnnnnnng time for this.
latorrem1

October 1, 2007 12:53 PM ET | Delete
You swept the Mets three times not twice, don't forget the May sweep at Shea. As a huge Mets fan i must say I am embarassed and appalled that the Phillies beat out the Mets because the Mets took everything for granted this year. The team was a disgrace and needs to make changes for next year. Enjoy the playoffs they are alot of fun. I think you would be better off playing the Padres as opposed to the Rockies.
latorrem1

October 1, 2007 1:21 PM ET | Delete
hey nice blog but just a couple of corrections. they do not have home field throughout the playoffs. the dbacks finished with a better record in the NL and the AL won the all-star game giving the american league home field. only have home field this round. the mets were swept by the nationals and lost 2 of 3 to the marlins. and howards mvp season last year outdid schmidts because he hit 10 more homeruns. but i do agree that what jimmy did this year was amazing. i still wouldnt be shocked though if matt holliday of the rockies beat out j-roll if the rockies win the wild card. its a toss up but i say j-roll. Go Phils!!!!
sabres51

October 1, 2007 2:48 PM ET | Delete
I believe the Diamondbacks would have home field advantage throughout the playoffs because they had one more win than the fightin' Phils. But I love the Monty Python in your post. My favorite movie of all time.
Buts16

October 1, 2007 3:35 PM ET | Delete
That was great.I am beyond pumped for our Phillies, what a feel good story.
avsnumber1fan