You know you're a hockey fan if:

You know you're a hockey fan if:

* You know all the words to "O Canada"...in French...and you're American
* You hear "Prince of Wales" and you immediately discount the guy with big ears, perk up thinking Bettman might actually get one right and realign the Eastern Conference and sadly realize it was the guy with the big ears all along. Damn Bettman.
* Your child does well in school on a test and the family lines up to tap gloves
* Your kids ask you about the great battles of history and - instead of talking about battles of Thermopylae, Hastings or Normandy - you describe the battles of Alberta and Ontario.
* Watching Peter Puck reruns with your kids is considered "quality time"

* You wish that world leaders could understand the level of respect shown between Bob Probert and Marty McSorley in 1994 after they threw haymakers for almost two minutes. They were warriors with honor. http://video.google.com/u...bHeqhp410T4g0YKKPCgJNYatw
* You left the older one to babysit. Upon returning home, you've found you had to give him a match penalty and you need to send the tapes to the league office to determine "intent to injure"
* You hear your wife talking about "boarding school" and you think she is talking about a place where they teach checking
* You hear the news talking about the "death penalty" and think they made up a new one just for Steve Downie

* You see a sign that says "No Diving" and your first thought is of Crosby
* The news talks about the arrests of a woman for "hooking" and you think, "Maybe she was just trying to slow him down?"
* You think Hexy, goal stick, Chris Chelios - worth 12 games and twice on Sunday http://www.searchforvideo...Fplayers%2Fron-hextall%2F
* You think life would be simpler if they went back to Campbell and Prince of Wales
* You see a woman wearing a business suit with shoulder pads and you tell her she might get 2 minutes for illegal equipment
* You hear Elton John's song "Bennie and the Jets" and you shake your head saying, it was Bobby Hull, Elton. " Bobby and the Jets" Silly Limey.
* You look at boxing and think that is what life might be like without the instigator rule
* You hear the words "slasher flick" and think they are talking about a documentary on Bobby Clarke and Valery Kharlamov's ankle
* You are able to convince your non-hockey buddy that "slew footing" was a runner up for the 2006 Kentucky Derby

* Arguing about not eating your broccoli will get your kids 2 minutes for unsportsmanlike conduct
* Your girlfriend asks you, "What's wrong with just holding?"...in your mind you weigh your options and you would but you don't want to do the time in the box
* Dave Schultz, Tiger Williams, Stu Grimson and Bob Probert are your answers for the 4 Apostles

* The sound of a foghorn sends you into a fever and you ask "Who scored?"
* You cut your hand badly working in the yard and you beg your wife to butterfly it and give you four aspirins so you can get back into the game.
* It's Saturday morning and your kids want to watch the story about Captain Hook. You reach for 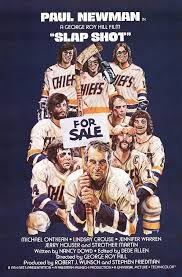 * Annually visiting the "Original Six" is a spiritual pilgrimage

* Your girlfriend asks you to ice the cake and then yells at you when she finds it down the hallway against the bathtub
* You child comes home from school and asks you to help her describe what perfection is. You show her the 1984-85 Oilers team picture.
* Dave Semenko squaring off with Tim Hunter during the Battle of Alberta in the 1980s - Priceless
* You live in the Southern US and have no idea what NASCAR is
* You still refer to teams being in the Norris, Smythe, Adams and Patrick divisions
* You realize how much you miss Gretz and Mario
* You check HockeyBuzz more than you do your own email

October 7, 2007 11:19 PM ET | Delete
nice blog again SYF. always enjoy reading. that mcsorley/probert fight, IMHO, is the greatest one-on-one fight in NHL history. there were some great ones over the years, but that was just an old fashioned slobber knocker. keep it up with the entertaining blogs!
blueline

October 8, 2007 8:52 AM ET | Delete
Um... is it bad if I'm already actually considering these?* You actually build a "sin bin" in the basement* You send your kids there in 2 and 5 minutes increments
DucksFan07